Fun and Games on the Old South Side

Haven't seen this sort of action in the neighborhood since they tore down the Delaware Terrace projects. The cops raided a house about a block away from TOF, looking for a fellow who had been dealing heroin on a nearby playground. There is an alley running behind the duplexes shown in the picture, and the playground is across that alley. In TOF's youth, that playground was actually a cornfield, improbably surrounded by houses and (on one side) by a carpet factory. Every spring the farmer would drive his tractor down from the hill and plow it up and plant corn. Eventually, a new generation of kids arose who regarded the corn as free for the taking, so he gave up and sold out and the city built a park where people could pedal heroin. The carpet factory is also gone. There is a drug store on the site. 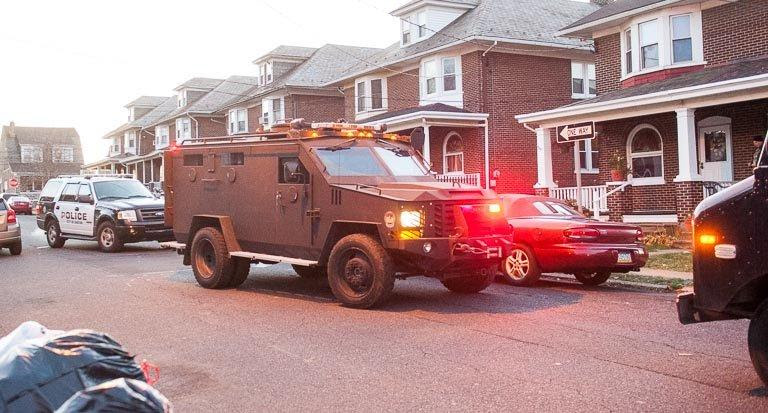 
Easton police served a narcotics search warrant and made one arrest Wednesday morning on the city's South Side.
Elijah Thompson, 23, was taken into custody as part of a Vice Unit investigation into heroin dealing at Milton Street Playground, police Lt. Matthew Gerould said at the scene.
Police obtained a search warrant for a car behind the home, Gerould said, and found $1,500 worth of heroin in the vehicle, Gerould said. Drugs were not found in the house but packaging materials were, Gerould said.

If you take a gander at the picture, you will see a big stone house in the background. This was the first house in the area and was built and inhabited by Francis Schwar (pron. Schwär), from an extensive family of stone masons. The area was once known as "Schwartown" for the large number of relatives scattered about. Their daughter was TOF's grandmother, who lived two houses to the left, off frame. Two houses farther down is the TOFian Fortress of Solitude.

Special Response Team action is actually rare these days on this side of town. But some years ago, before the projects were torn down, a dead body turned up at the intersection in the background. In another incident around the same time, a car full of urban youth pulled up to the red brick house across the street to the left from the Schwär house in the background, and took refuge inside. (That house, too, had once been a Schwar house.) Shortly after, another car pulled up and a hand emerged from the window with a gun, but found no target but a tree. That incident was captured on a nearby security camera. The first car, the one from which the youths had emerged, was being sought by cops for a drive-by shooting in the West Ward. Apparently, the cops were not the only seekers. The gun-brandishers were organizationally related to the targets in the original fusilade.