Pennsylvania famously consists of three countries: Philadelphia, Pittsburgh, and All the Rest. Often, statewide elections favor Republicans because Pittsburgh Democrats (who tend to be guns-and-Bibles, working class economic liberals) do not always see eye-to-eye with Philadelphia Democrats (who tend to be Main Line, upper class social liberals). Since Philadelphia outnumbers Pittsburgh, they usually get the pick and sometimes manage to alienate their allies in the West.

The only statewide contest this year was for Governor and although there was some mudslinging tussle in the primary, the Democrats forgot was a rotten guy their guy was according to their other guys (actually: gals) and closed ranks behind businessman Tom Wolf, who has now defeated the incumbent with the SFnal name of Tom Corbett in the Battle of the Toms by a margin of 9.8 percentage points.


Corbett was considered vulnerable because he had cut spending on education, which many confuse with cutting education. This was enough to mobilize the teachers unions. Other factors came into play, but many of them were the usual Northern European custom whereby if the harvest is bad, the king is burned in a wicker basket. This is a curse afflicting pols of every party, not excluding Obama, Bush, and so on. Not fair, but preferable to the god-kings of other traditions.

Broken down by county: Wolf won the populous areas of the Commonwealth, plus some outlying areas. The blue region in the center of the state below is where the state university is located. The upper left is Erie. The extensive blot on the right edge is, south to north: Philadelphia and her suburbs, the Lehigh Valley, and Wilkes-Barre Scranton, plus connecting tissue. The large red areas are less well populated, which is tough luck for the farmers, but no one will care after they have been subdivided into tract housing. 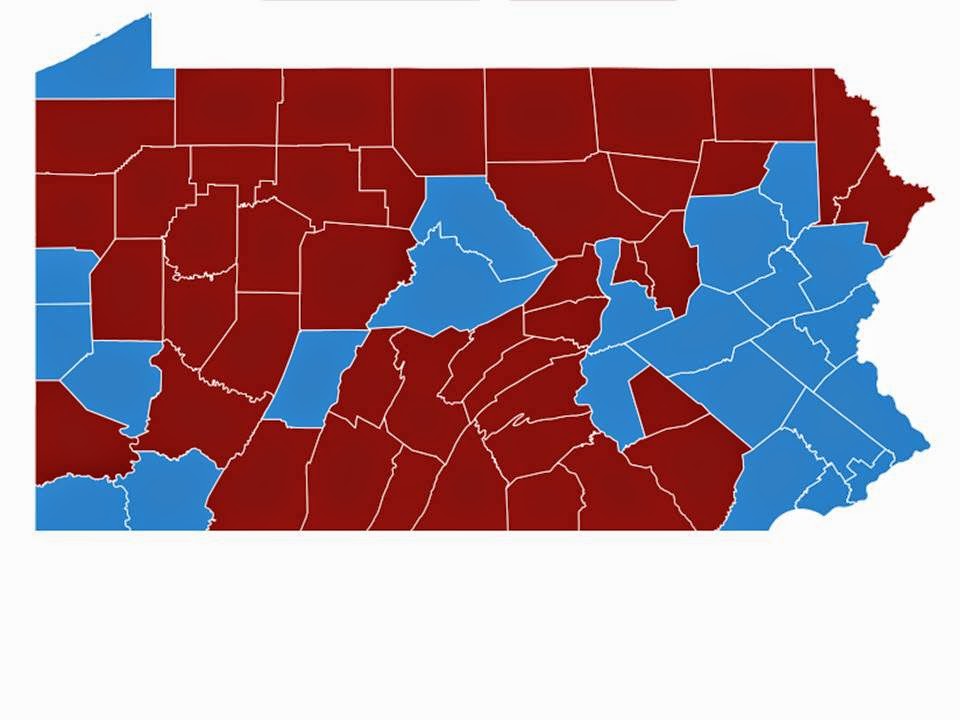 The other big contest in PA was for Congress. (There was no Senate seat up for grabs.) The results, by congressional district were as shown in the next map.

Of the 18 districts, 5 returned Democratic congresscritters and 13 Republicans, proving that while Pennsylvanians might readily vote one way for governor, they can easily vote the other way for Congress. Here you can easily see Pittsburgh (17th dsitrict) on the left and Philadelphia (1-2-13th districts) on the lower right. The monstrosity on the upper right is a single Congressional district (17th) which even though it wanders across six counties and a couple mountain ranges is not the most convoluted district in the Commonwealth. This is the district within which TOF dwells, purely by accident. (See the dangling appendage on the lower right of the blue area? The Powers That Be no doubt did that simply to include TOF! It is the only part of the 17th that is south of the Blue Ridge. The appendage that sticks up is to include the Wyoming Valley (Wilkes-Barre/Scranton),where the Perpetual Incumbent lives. There is very little in common between the Wyoming Valley, the Mahoning Valley (and other regions just north of the Ridge) and the smidgen of the Lehigh Valley thrown in as lagniappe.


TOF trained as a mathematician, and such things offend his sense of propriety. Congressional districts ought to represent as nearly as possible communities of common interests instead of, as they do now, communities of common party affiliations. There is a mathematical way to create compact districts using space-filling curves, but this may run afoul of requirements for special consideration of black voters.

Now the 12th, even though it wriggles across a third of the Commonwealth like a snake, is at least mostly farming communities; and the vast, sprawling 5th and 10th represent mostly emptiness; but not even quantum tunneling can explain the nearly disjoint 7th or (if your eyes are keen) the 13th.


This was the result of a Republican gerrymander that replaced the earlier Democratic gerrymander. In the interim, PA lost a Seat and the number of districts dropped from 19 to 18.

Posted by TheOFloinn at 6:02 PM