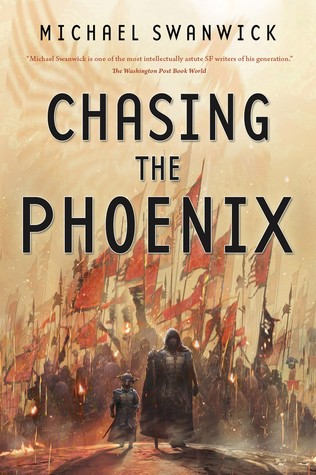 
by Michael Swanwick
Tor Books, 2015
TOF is unsure of the publication date for this gem, he read it in prepublication proofs. The web says August 2015. However, Faithful Reader ought to reserve a copy as soon as he, she, or it is able. Everything in this noble novel works -- from Surplus, the genetically-engineered dog, to the Hidden King who wants to reunite a a far-future, post-tech China, to even the office-names of supporting  characters. (One general is named Powerful Locomotive.) The dialogue is entertaining, the plot twists clever and supple, the narrative voice perfectly tuned, and the whole story suffused with sly Swanwickian humor.

There seems more than a touch of R. A. Lafferty in the thing, for those whose tastes run in that direction.

In this future, armies march with archeologists on staff, whose job is to unearth and restore ancient high-tech battle machines. The AIs that once ran the world tried to exterminate man, but were outlawed and destroyed. Maybe.

Darger and Surplus, the two heroes, are a pair of con-men whose goal is to get rich by attaching themselves to an up-and-coming warlord, the Hidden King. They pretend to have limited superpowers (Darger calls himself the Perfect Strategist) and bit by bit they talk themselves deeper into the complex rivalries of this future China.

They are not, however, the only ones running an agenda.
Posted by TheOFloinn at 8:38 PM