We're Having a Heatwave


TOF thought it might amuse his Faithful Reader to post here an excerpt from The Shipwrecks of Time, a novel in progress, in which characters mention things that were au courant back in 1966. There is a thunderstorm in Milwaukee and....


As they turned back into the building, the wind buffeted the front door so that it was sucked out and pushed in, like an invisible giant trying to gain entry. “Phil told me that the weather is actually calmer than it used to be,” Frank volunteered. “On the average.”


“I mean it. We hardly ever get the monster heat waves like in the 1930s, or super-hurricanes like the ‘Long Island Express’ in 1938.”


Wilma shrugged. “We never worried about hurricanes in California. Just earthquakes. And mudslides. And forest fires. Are you sure about the hurricanes? Nelson told me that global cooling is causing more severe weather.”


“Yeah. Nelson doesn’t know everything. People think there are more hurricanes because names are easier to remember than latitude and longitude. So since they started giving them women’s names a while back, people remember more of them. That’s all.”
-- (c) 2014. Michael F. Flynn, The Shipwrecks of Time 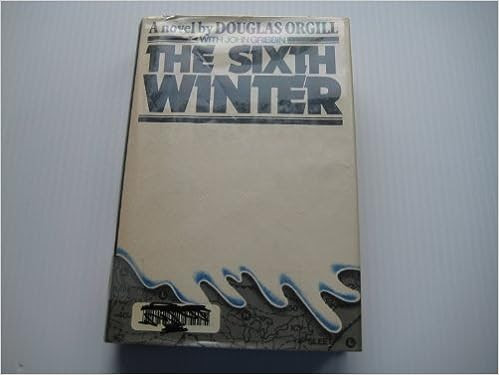 Based on newspaper stories gleaned on-line and on dire warnings in John Gribbin's novel The Sixth Winter. Everybody talks about the weather, but when there are rhythms on the order of 60 years, as in the case of the Pacific Multi-Decadal Oscillation, everything seems unprecedented, since human memory barely runs back far enough.

Meanwhile, "scientists are now seeing signals that the Sahara desert and surrounding regions are greening due to increasing rainfall," which if sustained, "could revitalize drought-ravaged regions, reclaiming them for farming communities."Another of the horrific effects of global warming, TOF supposes, albeit one seldom cited in the news. The greening of the Sahara is supported not only by satellite imagery, but more importantly, by computer models and the Oracle at Delphi.

Bad News for God, or Someone

Meanwhile, in other news, a marine biologist who blogs at something called the Huffington Post announces that the discovery of Kepler 452b is "bad news for God." The author is evidently a theologian, for he declares with certainty that "The discovery of just one such world is good evidence for many more" and "we come ever closer to the idea that life is common in the universe." Not that we have found any such life, mind you, but it's just gotta be out there, somewhere, because numbers. We note too that Mars is also within the habitable zone, but is no so far was we know actually inhabited.

(IOW: "in habitable zone" ≠ "supports life" ≠ "rational beings." It is from this string of inequalities that the author deduces the downfall of religion, which apparently amounts to bad news for God.)

The reason this is bad news for God and not for, say, the author of the article, is that "the Bible is unambiguous about creation: the earth is the center of the universe, only humans were made in the image of god, and all life was created in six days." So we see that the author is a fallen-away fundamentalist, or possibly that his mother was frightened by a fundamentalist when he was in utero. He gets his disbeliefs from the Bible.

However, if Augustine of Hippo and Thomas of Aquino could consider that the six days were metaphorical or even allegorical, any non-fundy type -- like the Catholic and Orthodox churches -- could likewise consider it. Besides, one needn't discover a planet a mere 60% larger than earth (est.) to deduce that the six days just might not be literally fact. Both Gus and Tom reserved judgement on the six days because they didn't have the data to support a firm nay or yea, a stance that TOF whimsically hopes marine biologists who blog on issues astrophysic might one day take to heart.

The author seems to suppose that the Earth being, in the old models, at the bottom of the world is in some sort of exalted place, whereas the medievals supposed the place ignoble, the bilges of the World, as far from the heavens as one could (get other than Hell). Besides, there is no privileged frame of reference, so it may as well be here as somewhere from which we cannot as yet make meaningful observations.

Then there is the curious announcement that "only humans were made in the image of god." Now, it is actually in the image of God, not god. (The capital carries semantic load. An impala is not the same kind of thing as an Impala, after all.) But the image refers to man's nature as a rational being, not to his physical body. Augustine said that sciopods, blemyae, pygmies, and other then-fanciful beings would be human provided only they possessed reason. And nowhere, save perhaps to fundies like the author, does doctrine say that "only" humans were so endowed. After all, the Church has always taught of angels, whom we may dub "extraterrestrial energy beings" in order to remain orthodox to modernity.

The author declares that if extraterrestrial life is ever discovered (and we might take passing note that it has not yet been) that "religion" (whatever that means) will "contort" itself to accommodate it. He seems unaware that it already has been accommodated and that no contortions were necessary. Once medieval legend had it that a doghead had not only been baptized but had become a saint. So it's not as if anyone had problems imagining intelligent aliens or incorporating them into their world-view.

Meanwhile up in the chilly Northlands, Obama has emulated King Canute by bidding the glaciers stop recession. Now the glacier he commanded -- the wonderfully named Exit Glacier -- has been receding since at least 1814, so is unlikely to head even so august a thing as an Executive Order. Hillaire Belloc once observed that people are far to much influenced by the recent past and seldom look more deeply into it. He was commenting at the time on the Western assumption that Islam was a spent force merely because within living memory it was. He warned that in the future a resurgent Islam might once again challenge Europe. (If we judge a theory by the success of its predictions, this might merit a second look.) The same might be said of things like "Superstorm Sandy" of 2012 vis a vis "the Long Island Express" of 1938. After 74 years, the latter had passed from memory.

Similarly, the advance and retreat of glaciers, which are said eponymously to proceed at a "glacial" pace. Note for example, the Annual Average Temperature for Alaska, where the sudden reversal of the Pacific Decadal Oscillation is clearly visible. TOF is generally suspicious of efforts to fair a linear regression through noisy data. He suspects multiple causal regimes. But they are useful to highlight general trends.

Alas, by the time the increasing temperature came to notice in the 1990s, people had already forgotten the relentlessly declining temperatures prior to 1977. Climatologist Roy Spencer writes:

The supposed poster child glacier for global warming in Alaska is Mendenhall Glacier…except that it had already retreated one mile by the early 1900s, long before human greenhouse gas emissions could be blamed.
Furthermore, its retreat is uncovering large tree stumps approximately 1,000 years old, coincidentally coinciding with the (naturally-caused) Medieval Warm Period, back when the Vikings were able to farm in Greenland.
Which begs [sic] the question: How could it have been warm enough to grow giant trees 1,000 years ago in an area now covered in ice?

One of TOF's pet peeves is the ongoing abuse of the phrase "begs the question" to mean "raises the question" or "leads to the further question". "Begging the question" actually means to embed the conclusion of an argument in its assumptions. For example, when climate data is pointed to as confirming a model when that same climate data was previously used to build the model. However, TOFian grumbles constitute a digression from the main point that Dr. Spencer makes: viz., that in historic times, the glaciers have advanced to cover a medieval forest. It hardly seems catastrophic if they have now retreated slightly.

TOF has other tabs open in his browser, relating to such diverse matters as the Syrian migration and Dawkin's argument for formal causes and the incarnation, but he must shortly depart for his monthly writers cafe. Play nice, until we meet again.

Posted by TheOFloinn at 6:20 PM

Labels: odds and ends, science marches on, shipwrecks of time