Hard to think of the Old Man as only 29 and the Mut with long hair. Much easier to think of bro Dennis grinning. TOF was always the more serious bro. Thirdbro is the Honorable Kevin, who seems not entirely certain what is going on. 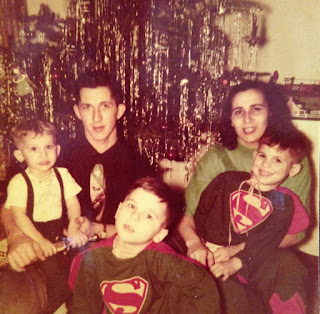 Tinsel was very popular back in the day. We called if "rain" for some reason. In the back right you can see a portion of the putz. It comprised a miniature village with two concentric ovals of HO-gauge track. There was also a creche in the faux fireplace, but it is not visible in the snapshot. It was a German thing. Everyone in the neighborhood -- which is to say all of TOF's relatives -- had a putz and on Christmas Day we would all go around the neighborhood to view one another's putz. This was known as "putzin' around," a phrase which the Mut used to describe her children when they were goofing off, which was more than occasional.

Because Dennis was born only 362 days after TOF, we tended to get the same presents. The parents would buy two of each. This year, it was Superman suits. Another year it was space helmets. These were the proper big plastic globes with antennae, but with a face-plate cut our of the front to forestall suffocation. Even in those young years, the Flynnlings suspected this feature would impair function in hard vacuum.

Ho ho ho. Merry Christmas to all.
Posted by TheOFloinn at 10:55 PM