The forces of demography, we find, preponderantly favor the devout: rather than a bright idyll of rational humanism, secularism creates a culture of almost mystical triviality, and Homo secularis turns out to be a creature so devoid of any sense of purpose that he can scarcely be stirred to reproduce.
-- David B. Hart 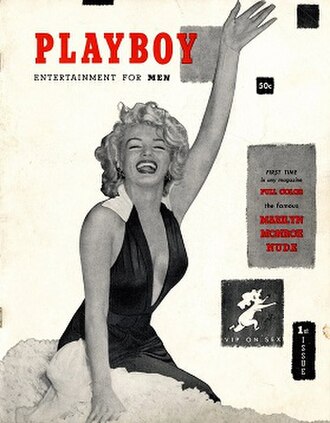 It's old news now, or maybe it was always old news, but Playboy claims it will not run nudie pix any more. It was done in by its own success. The Revolution had so commodified women's bodies that what the skin mag sold can now be gotten for free in every corner of the Internet. Why pay for the cow when the milk is free? as guys used to ask in a different context.

Oh, of course, there were the articles and the short stories and the interviews and profiles, but no matter how many claimed that they bought the magazine for those reasons, that was not the cause of its circulation figures; for why should the circulation have plummeted so drastically, given that the articles, short stories, interviews and profiles were still available.

Hefner described the "Playboy Man" in his first issue:


‘If you’re a man between the ages of 18 and 80, Playboy is meant for you. We enjoy mixing up cocktails and an hors d’oeuvre or two, putting a little mood music on the phonograph, and inviting in a female acquaintance for a quiet discussion on Picasso, Nietzsche, jazz, sex …’

Oh, yeah. The guys who read playboy asked the girls up to their rooms to talk about Nietzsche and Picasso. But these, like jazz, are now as passe as that phonograph. Or maybe that really was the demographic: those '50s swingers who paved the way for the '60s with their perpetual adolescence, their faux sophistication, and their mid-life crises. Once that generation was off the stage, the whole scene became old-fashioned overnight. Mood music? Really?

Hefner was selling a product and women, along with the cars and electronics whose ads filled his pages, were simply another commodity.

Now, the interviews and stories and such that it ran really were quite good; better than the sniggering cartoons and photo-arrays that carried them. And even the girlie pix were a cut above the norm for that sort of thing. There was some attempt at composition, and the women were shown as clean-cut all-American girls-next-door, assuming the girl next door was a bit slutty. This was the era of Gigi, Lili, Lolita, and Daddy Long Legs. Not to mention Heinlein's Door into Summer. So it was clearly an epoch of older men in love with girls and so the initial audience.

(TOF was misfortunate, girl-next-door-wise: next door to him was a field overgrown with weeds and an elderly couple of Protestant missionaries who seized and kept whatever baseballs were hit into their yard. The nearest girl to TOF's age in the neighborhood was on the next block, and she was his first cousin.)


On some level, the image of manhood and sexuality that Hefner was selling was always contradictory. You don’t get to be a cultured and refined modern man without exercising judgment and self restraint, but the sexual revolution that Hefner helped kickstart encouraged men and women to abandon the very inhibitions that helped make sex so alluring in the first place.

And so no wonder that the libertine ultimately ends with a magazine without nekkid wimmin in it.
Posted by TheOFloinn at 2:42 PM