TOF understands that the fascist tactic of mobbing a speaker and shutting him or her down has traditionally been understood as a victory of free speech on college campuses, but the tactic has now seemed to have spilled over to the real world. There, some have discovered to their utter horror, that folks Out There, unlike their fellow collegians, will sometime fight back. Ironically, these blue collar workers, whose fathers and grandfathers fought the Battle of the Overpass in Detroit so long ago, would have been members of the very political party from whose ruins the protesters of today have emerged to cavort amidst the ruins of the other political party. But they had been driven hence by the mockery and sneers of their Besserwissers.

Naturally, the media spin is that the silenced speaker has brought this on himself. (Nor can this be entirely denied. There are two kinds of politicians: the kind whose every transgression will be downplayed and pooh-poohed and the kind whose every misstep and gaffe will be repeated and magnified.*) This spin will persist until a similar band of rowdies shut down a speech by someone of whom they approve, much as Occupy X was approved of (despite various crimes committed in their encampments) until some folks occupied a bird sanctuary in Oregon. In the off season. Then it will be the protesters at fault. Well we can't have the Wrong People doing the protesting, can we?

Of one thing the media has not reminded the public: this tactic of mobbing disapproved speaker venues is not new for the folks involved in the Chicago incident. (Nor is the rationale that freedom of speech applies only to the right sort of speech.) Instead, they will (in today's terms) Blame the Victim -- though they will not of course use that phrase for the candidate silenced. Good heavens.

When will people learn not to whittle the club with which others will eventually clobber them?

But if the Late Modern memory were not so dang-blasted short-term, one might recall with some unease another decadent era when political rallies were busted up by jeering opponents: the Weimar Republic in the 1920s when NSDAP would disrupt SOPADE rallies, and vice versa. 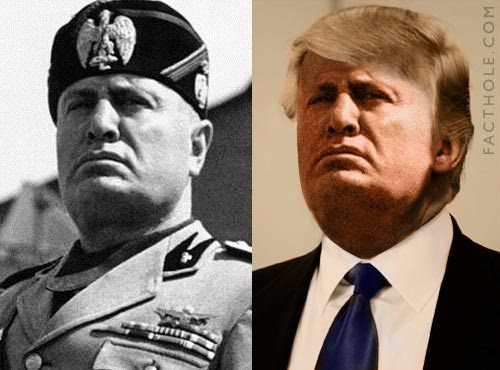 Postscript. It has become fashionable to compare Mr. Trump to a certain Adolph Hitler. The comparison is unfair. Trump does not rock a toothbrush mustache. Nor does he have those beady snake eyes. But he does bear a fascinating resemblance to Sgr. Mussolini. Watch the way he juts out his chin when he tilts his head back.

However, the closest match to Mussolini's Syndicates in recent years was Mrs. Clinton's "Health Care Alliances" proposed by her secret task force back during her husband's term in office. It's the thought that counts, not the fortuitous physical resemblances.

_________________________
(*) It need not even be a gaffe. Recently, a political enemy of Mr. Trump, took him to task for asking his supporters to raise their right hands and promise to vote for him, much as witnesses in court raise their right hands to take an oath. The person contended with a straight face that this reminded him of a Hitler salute. This was treated as if it were news, rather than political propaganda! The show's hosts then asked Mr. Trump if he would cease doing it, and of course he said no, "because people like it." Even though it reminds some people of the Nazi salute? Goodness get the smelling salts. The show moved on the next story and the videotape showed Bernie Sander finishing a speech, which he ended with a flourish, right arm fully extended from the shoulder, straight as a rod, slightly elevated. It was far more the image of the fascist salute than Trump's weenie court oath gesture; but no one will ever point it out or ask Bernie to explain. There's nothing to explain -- in either case. Get a grip, people. I mean, really.
Posted by TheOFloinn at 4:38 PM