Lighting up the Brain


Hey, ya ever see those brain image scans where they pretend they took snapshots of actual brain activity (rather than say model outputs of oxygen consumption is various regions)? Turns out there may be a slight problem:


"Functional MRI (fMRI) is 25 years old, yet surprisingly its most common statistical methods have not been validated using real data. Here, we used resting-state fMRI data from 499 healthy controls to conduct 3 million task group analyses. Using this null data with different experimental designs, we estimate the incidence of significant results. In theory, we should find 5% false positives (for a significance threshold of 5%), but instead we found that the most common software packages for fMRI analysis (SPM, FSL, AFNI) can result in false-positive rates of up to 70%. These results question the validity of some 40,000 fMRI studies and may have a large impact on the interpretation of neuroimaging results."

Cluster failure: Why fMRI inferences for spatial extent have inflated false-positive rates -- Eklund. Proceedings of the National Academy of Sciences of the United States of America 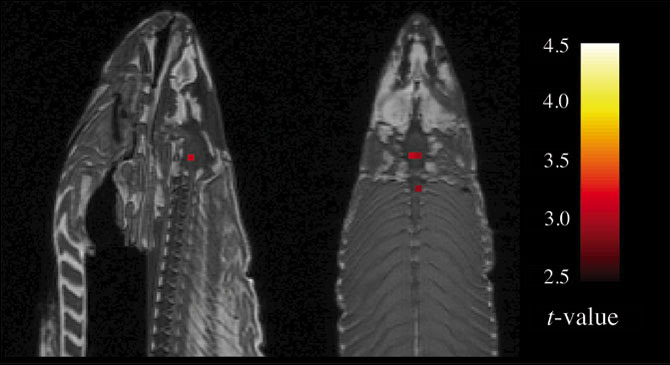 Well that explains why positive results were once obtained from a dead salmon. It does not explain why we keep getting positive results from neuroscientists, whose brains seem to light up at the thought of software highlighting regions in the brain. Esp. in the hypothalamus.
From the paper "Neural correlates of interspecies perspective taking in the post-mortem Atlantic Salmon: An argument for multiple comparisons correction," by Craig M. Bennett, et al.  (2009)

With  the  extreme  dimensionality  of  functional  neuroimaging  data  comes extreme risk for false positives.  Across the 130,000 voxels in a typical fMRI volume  the  probability  of  a  false  positive  is  almost  certain.    Correction  for multiple  comparisons  should  be  completed  with  these  datasets,  but  is  often ignored  by  investigators.  To  illustrate  the  magnitude  of  the  problem  we carried  out  a  real  experiment  that  demonstrates  the  danger  of  not  correcting for chance properly.

Subject.   One  mature  Atlantic  Salmon  (Salmo  salar)  participated  in  the  fMRI  study. The salmon was approximately 18 inches long, weighed 3.8 lbs, and was not alive at the time of scanning.

TOF loves that droll last sentence, delivered with admirable deadpan.
That rang a bell in the TOFian noggin and he recalled the adjustment to the t-Test that was devised by Ellis Ott for testing simultaneous means. For example: when testing the sample means from ten different stamping presses to determine whether it is plausible that all ten were running at the same process level. Ott called this method the Analysis of Means (ANOM) as opposed to the usual Analysis of Variances (ANOVA). He pointed out that the usual decision limits (i.e., the point at which one decides whether is it worthwhile to investigate for a cause rather than go on a wild goose chase) are premised on one sample mean versus a target value. But when comparing k sample means simultaneously against their common grand mean, the uncertainty increases exponentially. Basically, thus:

Suppose you have limits such that any one sample of size n has a 5% risk of falling beyond them for no particular reason. (We call that "random chance" but don't get carried away.) But now suppose you are comparing four group means, as in the illo above. Each one has a 5% risk of giving a false alarm and thus triggering a "wild goose chase" for an assignable cause even when there isn't one.

Assuming there is no actual cause to be found and the differences are due to sampling variation and to small variations due to a host of causes too small to be worth acting upon is called the Null Hypothesis. Nothing to see here. Move along. Notice that this doesn't mean there is nothing to see. It means you don't have sufficient evidence to make the Hunt for the Cause worthwhile. 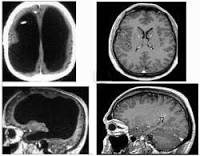 Posted by TheOFloinn at 1:19 PM