The topic of "Fake News" being much in the news lately, TOF thought he would much amuse himself by noting occasional sightings of the species here and there in the wild. Not being a frequenter of many of the places where these things are said to dwell -- indeed, he has never heard of many of them -- he is forced to rely upon his own sources and upon logical and rational analysis to identify them.

One of the most common kinds of false news is the press conference, or "photo op." These are dutifully reported by the Usual Suspects with faces among the straightest seen in all humanity, and often in the gravest tones. The media serves merely as bulletin boards for the press releases of the special interest groups holding the press conference. Recently, for example, the Democratic Party was shocked, shocked we tell you, to learn that the Republican Party intended to follow through on its promise to dismantle the Affordable [sic] Care Act. The skyrocketing insurance costs in premiums and deductibles consequent to this act was one of the factors leading to the narrow defeat of its perceived heir and champion, Mrs. Clinton, in the recent election, although this has not been much mentioned. So the Democrats in Congress held a photo op announcing their intention to oppose this opposition. So far, so good. This is the normal procedure -- sic et non -- pioneered in the medieval world.

This was their opposition: 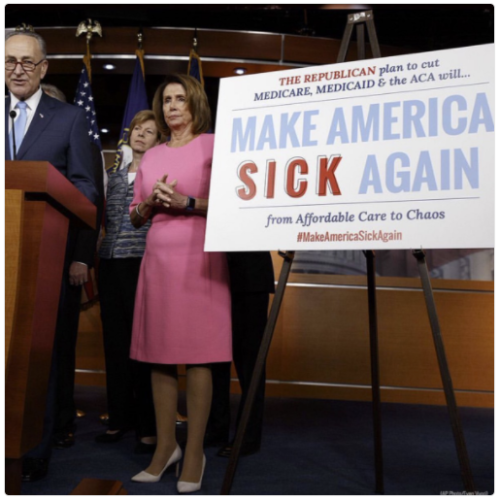 One immediately senses the overall ineptness that led the Party to its losses of Congressional seats, state legislatures, governorships, and now the presidency itself. Their sound-bite fails on two levels: the visceral and the rational.

On the visceral level, the casual TV viewer on the evening news -- and this is most viewers -- is left with only the vague impression of Democratic leadership gathered around a poorly-designed sign reading "Make America Sick Again." This is a heck of a motto with which to associate one's party. It is only in the fine print that one sees that they blame the Republicans for doing this; but who reads the fine print in a 15-second sound bite on the evening news? As an ad slogan even a neophyte on Madison Ave. could come up with something ten times better.

On the rational level, the ad's failure is worse. People do not get sick because they lack health insurance. They get sick because they contract diseases or suffer injuries. The lack of insurance affects the ability to pay for the care, but that is a different problem.  In fact, a major reason why many people had foregone insurance in the past was that, being young and healthy, they saw no need for the expense. That did not account for all of the uninsured, but it was a big chunk of them. Nor is it true that Americans were especially sick before the Obama administration determined to subsidize the insurance industry.

But the News has been sent. The Republicans want "to make America sick again," even if the signage was inept at making the point. Since Republicans do not actually want to do this, the photo op counts as Fake News.

In a discussion of the kerfuffle on another board, a correspondent had this to say:

The alternative to a regulated medical system is either to assume that you can make good health-care choices and bargains on your own, or to assume that your doctors will give you the best and cheapest care out of the goodness of their hearts.
Let's say that we've eliminated the bureaucracy and you come down with typhoid fever, because in the land of the free, no-one is organizing a vaccination program.
You can buy a medical text (although without collective agreement about things like the meaning of words you can't read or speak, but leaving that to the side.) but it'll take a while to determine what you're suffering from, because there are hundreds of possible diseases, and making an accurate diagnosis and determining a valid course of treatment requires years of training.

So you've got to trust doctors because human society is based on specialization. Some people build cars, others cut hair, others spend a decade and a half becoming doctors.
Or rather, they spend a decade and a half becoming doctors because the government doesn't allow them to practice medicine until they've put in that time. Without regulations anyone can hang up a sign and claim to be a doctor; and as they might be better at advertising than they are at medicine, they would rope in lots of patients, while delivering ineffective care.

It's hard to know where to begin with this. The netizen, a Mr. Eichenauer, must be very young since he evidently does not remember America as it was a mere eight years ago, before the ACA. He does not realize that vaccines were being developed by private industry long ago and programs of vaccination were being implemented even in the 19th century. Nor was it the government that declared how doctors might become doctors. Unique in the world, the Latin West had established medical schools, medical standards, medical societies, and medical practices in the middle ages, all without government tutelage. Now, it might be argued that the science of medicine had a ways to go. It still does. But that is a different pair of boots. Why he thinks that government bureaucrats would be any wiser at making medical decisions than doctors is a mystery; and how the ACA is to accomplish this is an even bigger one. It is only a law regarding the payment for insurance.
Posted by TheOFloinn at 2:46 AM