Technically, Memorial Day is for the Union dead of the Civil War, but was expanded to include all those who died in service the the United States. Since only one of those who follow died in service  and only one was a Union soldier, this list is not strictly correct. However, two of them did die later in life partly aggravated by wounds incurred in the service.

My father's cousin lived with villagers in the mountains near Cam Lo just a few miles south of the DMZ.

"The idea was to somewhat integrate with the Vietnamese people in order to gain their trust and friendship and ultimately military intelligence that would help us find the bad guys. It sounds good, and at times it was probably very good, because the Vietnamese were helped with schools and sanitation and protection from the Viet Cong. But it was also an extremely dangerous assignment. CAC soldiers lived near a village and survived mostly on their own. It was a small compound that was flooded when it rained and was overrun several times by the Viet Cong. On one such occasion, Mr. Flynn was severely wounded in the face, neck and thigh. He spent weeks in several hospitals and then a hospital ship with his jaw wired shut, before being mistakenly sent back to the war. He was given a choice; he could work in the rear or go back to his CAC squad. He was either a little nuts, or little bit more brave than most of us, because he chose to return to his squad."-- from Joni Bour's review of A Voice of Hope by Thomas Flynn 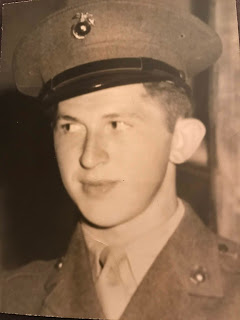 My father served on Iwo Jima and in the Japanese Occupation.

As a combat engineer, Joe had the task of blowing things up, a task at which he had had practice, since he had once blown up his bedroom at home while electrolysizing water into oxygen and (alas) hydrogen.  He was assigned to battalion liaison for the landing, which meant he landed with the first wave on Iwo Jima and would take word to his company of battalion location.  His buddies all figured he was a dead duck.  The beach was volcanic sand so fine and slippery that it was hard to get traction, and the Japanese had always dealt harshly with the first wave.
During one bombardment, he took refuge in a shellhole on the beach with (iirc) his captain.  A black marine from the Pioneer Battalion came to the edge of the hole and... stopped.  "Permission to join you, sir!"  The officer responded by telling him to get his sorry black ass into the shellhole tout suite.  Years later, recounting the incident, Joe said that the young man had grown up in an environment in which a black man did not join a group of whites without their leave, even if Japanese shells were raining about him.  A culture that would do that to a man, he said, just wasn't right.

On another occasion, while returning to the front line with anti=tank grenades, a Japanese mortar shell impacted in front of him. The blast lifted him up and dropped him on his back. For a while he lay there, numb and unable to hear. Gradually, his feelings came back and, standing up, he took inventory. Everything seemed to be working, which he found remarkable. And no blood!

TOF asked the Old Man once when he first felt old, and he said on his 20th birthday, the day he left Iwo Jima.
+ + +

My grandfather on my mother's side served in the St. Mihel, Meuse-Argonne Offensive.  He wrote home:

"It was on Sept. 26 when the big drive started in the Argonne Forest and I saw all kinds of things that I never witnessed before.  We started out on the night of the 25th.  At 9 o'clock we commenced a tank road and worked our way almost to the German's front line trenches.  At 2:30 one of the greatest of all barrages was opened.  It was said that between 3500 and 4000 guns, some of them of very large calibre, went off at that hour just like clock work.  We worked on this road under shell fire until about 3:45 and then went back until the infantry went over the top at 5 o'clock.  We followed with the tanks.  That is the way the Americans started and kept pounding and pushing ahead until the great day on Nov. 11.  ...

It was some life.  I am proud that I went through it, for nobody on the Hill will have anything on me...  I was a little with sneezing or tear gas.  It made me sick but I remained with the company for I did not like to leave my detachment at any time for if something would happen, I thought, there would be plenty of help.  I felt much better in a few days.  A small piece of shrapnel splinter hit me below the knee.  Otherwise I was lucky. ..."

"Somebody will wake up soon when the boys get back to the States..."

He had a cane inscribed "FRANCE" to deal with that shrapnel below the knee. That cane is now an aid in my own infirmity. Guv died young. I barely remember him. I was told that the gassing in WW1 contributed to his death.
+ + +

The great-great grandfather of the Incomparable Marge joined the Union Army when Confederates come into East Tennessee and told the fellas there 'you boys better be a-wearing gray in the morning' or they would be hung.  Well, they didn't cotton to that at-all, and so they left that night and crossed the mountains to sign up with Buell's army of the Ohio.

John fought in the Cumberland Gap campaign of 1862. He was captured there and then paroled. This was followed by the Stone's River campaign, the 5th arriving at Stone's River just in time. The regiment then held the crossroads after the battle of Chickamauga, before being pulled back into the Siege of Chattanooga, during which U.S.Grant takes charge. The regiment was then sent on the Knoxville campaign of 1863 to link up with Burnside. But since Longstreet was advancing on Knoxville right through the Hammontree farms, John (and others) went AWOL to see to his folks. Once the danger was past, he returned.

Finally the regiment was organized into Schofield's Army of the Ohio for the Atlanta campaign, and fought at Dalton, Rocky Faced Ridge, and Resaca.  At Resaca John received a bullet wound in left leg while the brigade was advancing the thickets against the Confederates entrenched on the ridge. This wound eventually contributed to his death, years afterward.

Margie's great-great-grandfather's grandfather fought at the Battle of Horseshoe Bend under Gen. Andrew Jackson in the Creek (Red Stick) War.  This was part of the War of 1812.

Andrew Jackson's official report of the Battle of Horseshoe Bend (27 March 1814) mentions that "a few companies" of Colonel Bunch were part of the right line of the American forces at this engagement. More than likely, some of those companies included Captains Francis Berry, Nicholas Gibbs (who was killed at the battle), Jones Griffin, and John McNair. In addition, muster rolls show some casualties from this battle in the companies led by Captains Moses Davis, Joseph Duncan, and John Houk. Other men from this regiment remained at Fort Williams prior to Horseshoe Bend to guard the post -- provision returns indicate that there were 283 men from Bunch's regiment at the fort at the time of the battle.
+ + +

James Hammontree's great uncle John enlisted in the 10th Virginia at an unknown date and may have seen action with the regiment at Brandywine and Germantown before entering winter quarters at Valley Forge.  In January 1778, he was reported "sick in camp" and he died there on 24 Feb 1778.

The 1st Virginia has a long ancestry, and exists today as the 276th Eng. Battalion of the Virginian National Guard.  John Hammontree's younger brother Harris Hammontree enlisted in the 1st Virginia on Feb. 12, 1778, after the regiment had gone into encampment at Valley Forge.  In April and June he was reported as "sick," but unlike his older brother, he survived.  He may have participated in the battle of Monmouth in June 1778.  Most of the regiment was captured by the British at Charlestown, South Carolina, on May 12, 1780, but Harris may or may not have still been with the regiment at that point.  He was killed by Indians on the Virginia frontier, 25 Jul. 1781.
Posted by TheOFloinn at 11:23 PM