Nearly all of TOF's maternal ancestors came from the villages of Oberhausen and Niederhausen. The names mean "Upper Houses" and "Lowet Houses," with respect to the flow of the Rhein. Oberhausen is upstream. From the German Wikipedia page for Rheinhausen:


Around 7000 years ago, people who lived from agriculture and fishing settled on the fertile loess soil between the districts of Oberhausen and Niederhausen in Gewann Rebbürgerfeld. The vinegrowers were among the first farmers to be archaeologically proven in Central Europe. Further archaeological findings prove that the area was regularly populated in the period that followed.

The founding of the settlements which became the villages Nieder- and Oberhausen occurred in the 6th to 7th centuries when the Breisgau was settled by the Alemanni. Niederhausen was first mentioned in records in 861.

Since 1343, the municipalities were fiefs in Farther Austria, and remained so with changing local authorities until the Organization of the Reich. In 1805, Oberhausen and Niederhausen became part of the Principality of Baden.

Until the regulation of the Rhine and the canalization of the Elz in the 19th century, the places were regularly threatened by sometimes devastating floods. The hydraulic engineering measures significantly improved this situation, but led to a decline in fishing and Rhine shipping, which finally came to a virtual standstill.

The communities were supplied with electricity for the first time in December 1906, Oberhausen on 17th and Niederhausen on December 18th. The electricity was supplied by a small hydraulic power station on the Elz. This power plant was previously used to drive the machines of a sewing silk factory.

The community Rheinhausen was formed on May 1, 1972 by uniting the two communities Niederhausen and Oberhausen.

Rheinhausen is predominantly Roman Catholic. There are therefore Catholic parishes in both districts, and there is also the St. Michael priory of the Fraternity of St. Pius X. The evangelical believers are cared for from Weisweil. 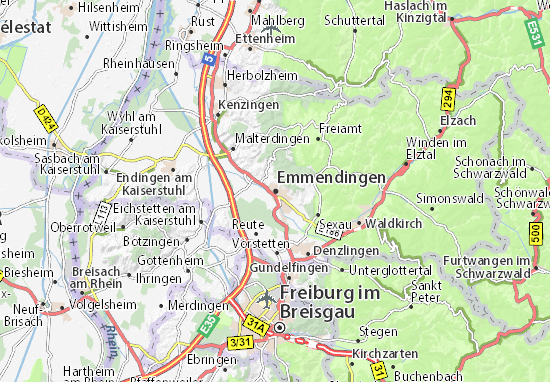 Rheinhausen appears on the map at about 11:00, near Herbholzheim and Kinzingen, both places from which occasional ancestors came. South is the Kaiserstuhl, a mountain under which Kaiser Babarosa is said be sleeping. Directly southwest is the Black Forest and if one looks to Freiburg im Breisgau and to the right, you might, if you squint hard enough, you might even spot Eifelheim!

There is also a Niederhausen in Nordrhein-Westpfalz and many an ancestor-hunter on Ancestry has reflexively chosen it from the prompts, even though TOF knows from the microfilms years ago that the Badner site is the proper one. That's why search engines should be called Artificial Stupids.


The Germans multiply like loaves and fishes. Unlike Ireland, where Catholics could not keep records much before 1820, Germany has records back to the butt-end of the Thirty Years War. This war devasted the Germanies, in particular the southwest where TOFian ancestors heighed from. (This was when France first seized the Elsass from the Empire. The Elsass is directly across the Rhein from Rheinhausen.)

Starting from Martin Schwör, the descent is...


It's actually interesting how few generations are needed to cover three hundred years!

Posted by TheOFloinn at 8:35 PM