Sixty-five years ago today, a young man named Joe Flynn was the first to climb down the netting from the side of his troopship and enter a smaller craft that would take him to an LST.  He fell off the netting, but a fortunate sway of the boat brought it underneath him, so he landed on his backpack in the boat rather than in the Pacific Ocean between the pitching boat and the hull of the troopship.

LST is an abbreviation, Marines will tell you, for Large Slow Target.

The boat got lost among the fleet and could not find the LST.  The navy pilot had to stop and ask for directions.  There were a lot of ships there.  (On one of them was a young navy rating who was my wife's uncle.)  When they finally reached the LST, all the good spots were taken by Marines from the later boats, who had not gotten lost and so arrived ahead of them.  So young Joe found a spot on deck: a tarp stretched across a hatchway.  He lay down to get some sack-time, figuring it might be a long while before he had the chance again.

The LST was packed to the deckline with supplies, so the tarp was covering boxes and crates.  It was hard to get comfortable.  Finally, he grew curious.  Just what was he sacked out on?  So he lifted the edge of the tarp.

The entire hold beneath him was packed with boxes labeled "Grenades."

Well, he figured, if something did go wrong, at least he would never know it; and he stretched out and went to sleep.
+ + + 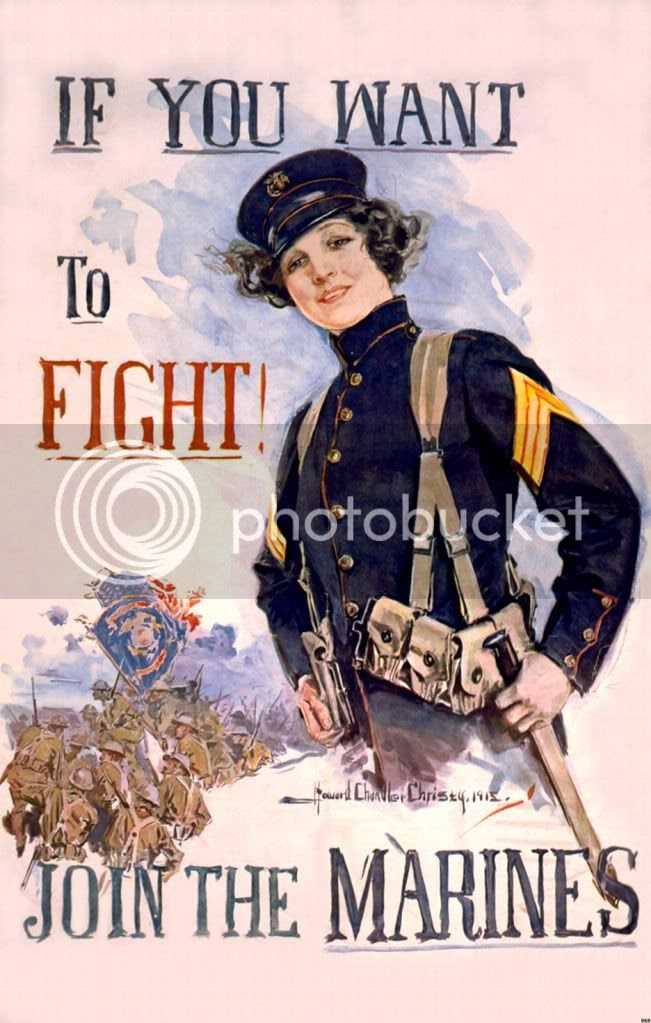 Here is how he became a Marine.

He had gone down to the draft board when his number came up.  There were recruiters there for every branch.  He wanted to join the Marines, so he had to go to the Navy table.  The Navy guy tells him that he thought the Marines had already gotten their quota for the day, but there were still naval slots open.  Young Joe insisted though and finally the guy relented.  Go down that hall there and ask the sergeant.  But if he's full up, I'm signing you up for the Navy.

So Joe did so.  He sees the Marine sergeant just leaving with a group of civilians.  "I got my quota," the sergeant says holding up a hand.  "No more."

"But, sarge!" says Joe plaintively, "if you don't take me, I'll have to join the Navy!"

The Marine sergeant considers that for a moment, and the tone of voice in which it was said.  Then he huffs.  "Well, come on then."  And goes back in the room and signs him up.
+ + +
Here is how he got his specialty.

He had taken a battery of tests and scored very well on the Morse Code.  He had had a radio at home, and a chemical lab.  He is, so far as I know, the only member of the family to have blown up his own bedroom.  (Go see if your brother has killed himself, his mother sighed on the sidewalk below, as she watched the glass flying out of the window.)  The lieutenant tells him with his scores he should put in for signal corps.  No, said young Joe, I want to blow things up.  At this, he had experience.  And so he wound up in the engineers.
+ + +
How he got to Iwo

As the LST approached the island, he was contacted by his platoon lieutenant, who appointed him to be liaison with company.  You land with the company commander, he was told; and then when the command post is set up, hunt me up and tell me where it is.

This is the Marine Corps.  The company commander lands in the first wave.

Joe's buddies greet this news with jolly salutations, like "You can kiss your ass good-bye."

But the Japanese commander is smart.  He withholds fire because he wants the beaches well and truly filled up before he lays in on them.  The first wave lands without much incident; but the second wave gets plastered by artillery that has the whole island ranged ahead of time.
+ + +

His most interesting task

He and another engineer were sent to the north side of the island to clear the beaches there of any mines.  They dig cautiously.  Eventually, they find something.

He and his friend consider this for a time.  Then they look at each other and shrug.  What the hell.

So what the hell.  They disarmed it.

Later in life, there was nothing, absolutely nothing, that my brothers or I could do that could fluster him.
+ + +

His most stressful task, except for when he got blown up

He had been sent back to the rear for something and was now approaching once more the front.  There is a run-off gully and he enters it on his stomach, crawling forward.  As he inches along, he sees ahead of him a place where a second gully joins the one he is in.  It is running parallel to his own course.

He begins to inch forward once more, and shortly the sounds from the other gully start up again.  As he nears the juncture, he brings his rifle to ready and works the bolt to load a round.

The distinctive sound of a bolt action comes from the other gully.

He eases his way to the juncture, peeks around the edge, and

there is his lieutenant, also with his rifle cocked and ready.  The lt. looks at him for a moment; then safeties his rifle.

"Scared the shit out of me, Flynn," he says.

How he got blown up

There was a rumor of a possible Japanese tank attack.  The island was honeycombed with caves and tunnels and underground storage bunkers.  SF fans who have read Starship Troopers would recognize the battle of Iwo Jima in the battle of Sheol.

Young Joe suggests to the lieutenant that if a tank attack was in the offing, it might be a good idea to have some anti-tank grenades.  Apparently, no one has thought of this.  So the Lt. sends him to the rear to fetch the aforesaid grenades.

He is coming back with a satchel-full slung across his shoulder and is crossing open ground when an artillery shell goes off directly in front of him.  The blast lifts him up and hurls him backward and he lands on his back.

The anti-tank grenades he is still carrying don't go off.

He lies for a while, his entire body numb, and wonders if he is paralyzed.  But gradually his feelings return and the ringing in his ears dies down.  (It never goes away.  He still hears it.)

He tests himself.  No bleeding.  No bones broken.  So what the hell.  He dusts himself off and completes his mission.

He figures from this - and the 500 lb aerial bomb and one other thing - that he is being saved for some important work in life.

The one other thing.

One day he is off the line and in the rear and by some good fortune a shipment of canned peaches have been located.  So he and two buddies eat the canned peaches, which are very delicious.  Then they return to the front, where their task is to seal off as many bug holes as they can locate.  (SF fans will note again how Heinlein used this in Starship Troopers.)

They make their way to the top of a small ridge, three abreast, and creeping on their stomachs peek over the top of the ridge.

Below is the opening of a cave and a Japanese machine gun opens up, stitching across the top of the ridge.

The three of them slide back down behind the ridge.

That is the margin.  A little swerve in the machine gun, or if they lined up differently crawling up the ridge...
+ + +
How the Old Man became an old man

My brothers and I asked him once when was the first time he felt like he was an old man.

"On my 20th birthday," he answered without hesitation.

Where was that? we said.

Where I came from.

Because of the initiative he had shown at several points in the battle, the Marine Corps after the war twice offered him a commission as an officer.  But he was anxious to go home and marry his girl, who had been writing him so faithfully.  And so he did. 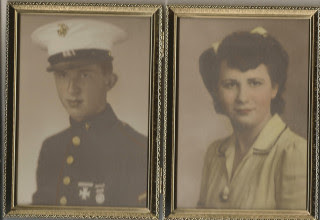 Little did he know that she had been writing to half the Seventh Fleet.  But it all worked out for the best - i.e., me.  Had he taken the commission he would have still been in when Korea broke out, and the window of opportunity for me would have been well past. 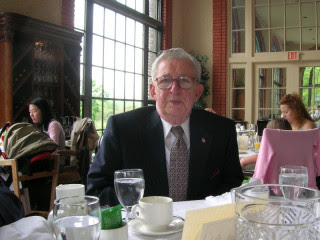