It's hard to fathom the obsession some scientists have with trying to prove that they have no minds.  In Neuroscience, free will and determinism: 'I'm just a machine', the electrochemical reactions in the brain belonging to Prof. Patrick Haggard try to do just that.  This is a bit like Parmenides trying to sway [move] his listeners into believing there is no motion in the world.  But no doubt these chemical reactions were compelled to make the useless effort.

The reactions in the Haggard brain have devised a technique -- "transcendental magnetic stimulation" -- which supposedly demonstrates that:

"We don't have free will, in the spiritual sense. What you're seeing is the last output stage of a machine. There are lots of things that happen before this stage – plans, goals, learning – and those are the reasons we do more interesting things than just waggle fingers. But there's no ghost in the machine."

The chemical reactions reactions accomplish this by manipulating an "assistant" into using a magic wand to generate a magnetic field in the brain, triggering certain neurons into twitching a finger.  Whereupon the entire edifice of Western Thought since Plato comes tumbling down.

Or not.  It is not clear what the brain chemicals mean by "free will, in the spiritual sense" or "ghost in the machine."  But it is quite clear that they do not understand what is meant by "will" or "free."  They assert reflexively that because we have reflexes that can be triggered externally we have no will.

But no one has ever asserted that there are no such things as involuntary actions, or that voluntary actions might be simulated by an artifice.  With a flight simulator, we can take a 747 from New York to Paris; but that does not mean we will find ourselves in the City of Lights when we emerge.  And it certainly does not mean that air travel is an illusion.

﻿
And it does not mean that the will is unencumbered by habit, error, mental or physical illness, or other impairment -- including magnetic wands.  It only means that it is not determined by external forces.  Someone could seize hold of Prof. Haggard's finger and twitch it mechanically, but the fact that an external force can also move his finger does not demonstrate that in the common course of nature Prof. Haggard himself does not normally choose to do so.

Part of the problem is the blindness of modern science to formal and final causation.  These two causes are making a quiet re-appearance under new names like "emergent property"/"self-organizing system" and "attractor basins," but they have been banished from our thinking of causation for several hundred years.  Therefore, Haggard and others misunderstand both "will" and "free."

The electrochemical reactions in the brain are simply the material cause of the choice.  They are not the formal or final causes.

Prof. Haggard proves this by saying:
"There are physical laws, which the electrical and chemical events in the brain obey. Under identical circumstances, you couldn't have done otherwise; there's no 'I' which can say 'I want to do otherwise'. It's richness of the action that you do make, acting smart rather than acting dumb, which is free will."

From this we conclude that Prof. Haggard is saying that there is no Prof. Haggard saying this.  Literally!  The last sentence appears to be pure gibberish, simply the outputs of electro-chemical events in the Haggard brain.  His brain chemistry did not condescend to explain how there could be such things as "smart" or "dumb" or indeed "rich" under his own assumptions.

So, What is This "Liberum Arbitrium"?

First of all, note that the term we translate as "free will" is liberum arbitrium, which means "free judgment."  (See Summa theologica, Pars I, Quaestio 83)  Ever since the triumph of the will, we have gotten the will confused with concupiscence and have forgotten that it once meant part of a rational act.

The word anima, which we translate as "soul," means "alive."  So to ask if X has a soul is to ask whether X is alive.  This can be verified empirically.  But the soul is simply the form of a living being.  There is no more a separate "ghost in the machine" than there is a separate "sphere in the basketball."  The "ghost" just is the machine, or rather the form of the "machine."

The powers of a body derive from its form.  Sodium and chlorine are made of the same materials: protons, neutrons, electrons.  What makes one a flammable metal and the other a poisonous gas is the number and arrangement of their parts; i.e., their form.  A form may or may not be "spiritual," but it is certainly not material. 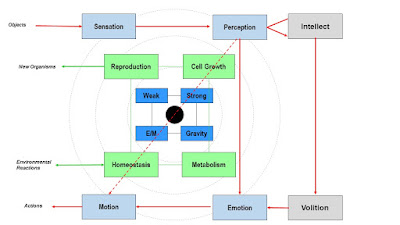 The rational soul differs from the sensitive [animal] soul by the addition of the two rational powers: Intellection and Volition.  In the sensitive soul (Stimulus to Response in the drawing) particulars are perceived by the inner senses, which we may call collectively "Imagination."  The Emotions are an appetite or desire for these percepts.  (This includes the desire to avoid.)  Hence, they are called the "sensitive appetites."  (Autonomous actions are the "short circuit" in the diagram from Perception directly to Motor Powers.)

The Intellect reflects on the perceptions of the senses and abstracts conceptions from them.  We perceive Lassie and Fido and Rover and Spot; but we must conceive "dog."  The concept "dog" has no physical existence as such.  Only particular dogs have physical existence.  The form of "dog" is something over-and-above this dog or that dog.

Aquinas called a human act precisely those acts performed with intellect and will.  All other acts were "acts of a man" but not "human acts" as such.  The intellect through understanding, knowledge, and wisdom recognizes/knows an end.  The will, exercising justice, temperance, and courage, desires the end and chooses the means to achieve it.  The link between the two is prudence, by which the intellect decides that the means are proportionate to the ends.


Thus, every voluntary act is two acts.
Thus, materially, I might reach out and grab a baseball bat.  Formally, I may intend to hit a home run or (more modestly) a base hit.  Or I might intend to stimulate Prof. Haggard's brain atoms with it.

And of course, not all acts are voluntary.  Some are induced by baseball bats to the head, or by strong drink, or by magnetic wands.  Because our friend Haggard deliberately restricts himself -- or his brain atoms restrict him, will he, nill he -- to purely material causes, the whole concept of "intention" becomes invisible to his methodology, and so invisible to his brain atoms.  No wonder he does not see intention!  And what he will not see cannot exist.

Now, What About That "Free" Part

To say that the will is free is simply to say that it is not determined externally to some particular end.  This does not mean we are indifferent to the end.  A dog that is hungry will eat.  A man who is hungry may fast from piety, diet from vanity (or health), dine abstemiously, pig out, etc.  Those who are expert in the measurement of inanimate objects tend to confuse motives or reasons with causes.  But that someone is motivated by the desire to lose weight does not mean that his behavior at the buffet table is caused by that desire in the same way that a current is caused by and electro-motive force.

James Chastek summarized this in an Interior Dialogue on Free Will, which I have taken the liberty of reproducing here.  I have renamed his "A" and "B" for my own amusement.


Socrates: Does it seem reasonable to say that will is a kind of appetite, and that we can question whether this appetite has some sort of freedom? Even if “will” doesn’t exactly mean “appetite”, you’d still admit that we have desires and appetites.

Socrates: So what sort of thing is desire? For example, can we desire something that we are utterly ignorant of, or do we at least have to have some idea of it?

The Athenian: I’m not sure that “not being utterly ignorant of X” and “having some idea of X” are the same, but that seems right.

Socrates: So the desire for X follows some awareness of it -- though this can mean many different things. The desire for peace, for example, can be had even during war.

Socrates: So you’re claiming that we have no choice but to desire the goods we desire?

The Athenian: Right, once we learn enough, we’ll know exactly why we see all these things as good. Just look at what evolution can explain about beauty, morality, altruism, etc.

Socrates: But we desire these goods only so far as we know them?

Socrates: Now do we know everything we desire with absolute clarity, or not? If we want peace, do we know exactly what the peace will consist in, how we will get to it, how fast we can attain it, and all the other relevant details?

Socrates: But then our knowledge of these goals is vague and indeterminate, and could be fulfilled in any number of ways.

Or to put the matter in simpler if less entertaining form: Since we cannot will what we do not know, the freedom of the will follows necessarily from the incompleteness of our knowledge.  Presumably, should there come a time when we see all things clearly and not as if through a glass darkly, then the will will be perfectly ordered toward the ultimate good, of which all lesser goods are mere reflections.  (The proper object of the will is the good.  No one desires what they believe is bad.)

Chastek again, in a "Ramble on free will"


St. Thomas explains the freedom of the will though the indetermination of the intellect: we choose in virtue of some concept or idea, but our idea is not determined to some one particular, so neither is our choice. Whenever I read debates about “libertarian free will”- or scientific trials that hook up electrodes to a guy's head to anticipate what he will decide when we tell him to make some random choice- I get the sense that the debaters have a much more elaborate notion of “free will” than St. Thomas had. Who can object to the idea that we act in virtue of concepts that are not sufficiently determined to one result, and so far as this is true, our action is not determined to a result? Do we really need to argue about this? There is mountain of after-market qualifications we can add to this rather weak account of free will. Habits (which for St. Thomas are any determination of a power, whether this arose from personal, cultural, or genetic origins) certainly play a role in fast-tracking our undetermined concepts to one deteminate thing.  A good deal of life needs to be simply executed automatically, and so much of our action- probably much more than is worth thinking about- is almost certainly “determined” in the sense of foreseeable by another. Do we really need a brain scan to tell us this? Can’t we figure this out by living with someone for a week?

Chastek essays and comments:
Determinism as a cause of free will
Free Will and Electrodes