The Decline of Art As We Once Knew It

The elusive God particle eludes them again.
It would be funny if the God particle turned out to be composed of three quarks in one particle.

Is Political Science Still Science?  Does it Depend on the Politics?


The CLOUD experiment at CERN in Geneva, which was to test Henrik Svensmark’s hypothesis that cosmic rays help make clouds has been run.  We have the following remark:


I have asked the colleagues to present the results clearly, but not to interpret them. That would go immediately into the highly political arena of the climate change debate. One has to make clear that cosmic radiation is only one of many parameters.
Rolf-Dieter Heuer, Director General of CERN, in an interview by Welt Online
(scroll down to "Ich habe die Kollegen gebeten...")
Nigel Calder draws four inferences:

Heuer also says: Wir werden in spätestens zwei Jahren eine Antwort auf die Shakespeare-Frage für das Higgs-Teilchen „to be or not to be“ haben.  (In at most two years, we will have an answer to the "Shakespeare Question" for the Higgs particle: "to be or not to be.")  See above, re elusiveness.  We'll probably have controlled fusion in twenty years, too.  After that, out flying cars.

You Can't Just Do It; Ya Gotta Do It the Right Way!

An article at The Catholic Thing takes note:


why haven’t you heard about the plunging prevalence of AIDS in Zimbabwe?  It dropped almost in half, from an astonishing 29 percent of all adults nationwide in 1997 to 16 percent in 2007, according to an important study published in February.  The study was briefly summarized by the New York Times, but its findings generated little buzz because the decline did not occur the way it is supposed to.

In a nutshell, changes in sexual behavior – substantial reductions in casual, extramarital, and commercial sex – accounted for the drop in AIDS. Condom use did not shoot up during the same period

The Dance of the Solars 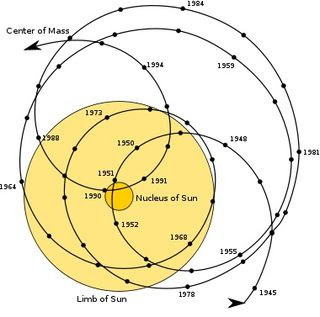 An intriguing note on the motion of the solar system's barycenter, vis a vis earthly climate.

First I studied the SIM periodicity and in 1987 I came to survey the geometry of this motion. I discovered the solar motion can be classified into two elementary types. Motion along a trefoil-like trajectory governed by the Jupiter-Saturn order. And another motion type which is chaotic. This gave us a precise homogeneous basis, upon which it became possible to study the solar-terrestrial and climatic variability. You may find it comforting that no matter how the Sun wiggles, every 179 years it comes back to a regular trefoil path. It is important to note, that the periods of chaotic motion coincide with the long-term minima in solar activity such as the Wolf Minimum (1270-1350), Spörer Minimum (~1430-1520), Maunder Minimum (~1620-1710) or Dalton Minimum (~1790-1840). During the trefoil periods the ST-phenomena are stable – the sunspot cycles are 10 years long, volcanic activity is muted and in the middle of the trefoil period there is a temperature maximum down here on Earth.

Useful Stuff on Titles
Remember our post on Titles?  The inestimable Juliette Wade had a similar essay which she has reposted here.  I can recommend her website for all would be writers.

Useful Stuff on History of Science
This site has some kool essays on telescopes, Galileo, and suchlike matters; and even way kool timeline graphics.

Quote of the Week

"The idea that 'beliefs must always be proportionate to the evidence' would make obedience, patriotism, piety, and even most motherly love a kind of irrational fanaticism."
-- James Chastek
Posted by TheOFloinn at 11:46 PM