For a story to really click, it should score high in all four categories.  Many years ago (in a typewritten letter, that's how many years ago) I showed Nancy Kress a Story Cube I had sketched in a moment of whimsy.  Because drawing a four-dimensional cube on a two-dimensional sheet is contra-indicated, I only drew three of the four.  But the basic idea is simple: Imagine each dimension of the story as, well, a dimension.
X. Character Axis.  Runs from stereotyped, cardboard characters up through fully realized 4-dimensional characters.  A character like Nero Wolfe would fall somewhat left of the middle, as he is "characterized" essentially by a set of odd and deliberately distinctive quirks.
Y. Event/Plot Axis.  I'm not sure "dull" is the right word for the low end of the axis.  Perhaps "hackneyed would have been better; and "ingenious" rather than "page-turner."

Let's pause.  Nancy Kress replied concerning a then best-seller that "the characters had all the depth of wallpaper, but I couldn't stop turning the pages."  Considering only the Characters and the Plot, it is certainly conceivable that a story could succeed with an engrossing plot while having merely adequate characters.  Similarly, a story could succeed with fascinating characters and only an adequate plot.  Fans of Sci-Fi often complain about literary fiction because "nothing happens."  Fans of Lit-Fi often complain about science fiction because the characters don't seem to develop.  But it's really that one genre is further out one axis and the other is further out a second axis.  A reader once complained to me that I spent too much time developing characters; he only wanted "the content," that is, a narrative of the plot events.  Just tell me what happens, not what sort of childhood the protagonist had. 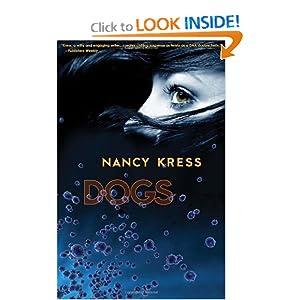 Z. Setting Axis.  At one end is the dreaded "white room," iow, a generic setting, not well described.  It is a world where a dog is only a dog and not a snarling Doberman; and a chair is only a chair and not an upholstered wing-back chair.  At the other end is a setting so well described that the reader thinks he is in it.  It is not simply the Doberman snarling in the wing-back chair, but the generalized significance and the emotional mood of the setting.  The homeowner indulges his dogs, and that is his chair, and he is warning you off.  Or the dogs have all gone mad and the Doberman has eaten the homeowner and has now taken his seat.  It could be a comic scene or a scene of terror.  Now we are at the far-end of the Setting axis.

Idea/Theme Axis (not shown).  The continuum here runs from shallow to deep, or something of that sort.  Sometimes, we're only looking for light entertainment; other times for something that will grip us and make us think.  As with the other axes, a story may succeed with a pedestrian or repetitive idea - Sherlock solves yet another case - provided the events that accomplish this are ingeniously arranged, and Sherlock is a convincing character.

The Pot-boiler Barrier.  Down in the corner is a quarter-sphere below which we have cardboard characters in a white room pursue a humdrum plot in pursuit of a fatuous idea.  These are sometimes called "best sellers."  (No!  Smack!  Bad Flynn!  Bad!)  Actually, they are called The DaVinci Code.  (Stop that!)  But the idea that you can pursue a fascinating plot with ordinary characters goes only so far down the scale of ordinariness.  There comes a point on the scale where the characters are so badly realized that no amount of plot excitement can save them.  And the same goes for the other Dimensions of Story.

Your Challenge.  I divided each dimension in the Story Cube into "low" and "high" halves.  This makes eight "rooms" in Story Cube Hotel.  The room numbers are (character, event, setting) and are either 0 (low) or 1 (high).  Don't be confused: it's like a cube plot of a 2^4 factorial experimental design.  (That was supposed to clarify.  The sort of mind that would create the story cube is the sort of mind who would think that would clarify diddly-squat.)  Anyhow, Room 000 is where the Potboiler Barrier is; but let us allow than some books or stories in this octant would not be quite that bad.  Room 010 is the room where characterization is low, plot is high, and setting is low.  And so on.

Your mission, if you choose to accept it, is to suggest stories to go into various quadrants, SF or otherwise.  What would you put in Room 111 (characterization is high, plot is high, and setting is high)?  What were outstanding on two axes, but only so-so on another?
Posted by TheOFloinn at 5:25 PM