One of the peculiarities of writing, and for some a fun part, is researching and creating the background.  It is TOF's custom to weave any real history into the fictional narrative as closely as possible, so if any reader is insane enough to research some reference, he will actually find something at the other end.  Usually.  Well, sometimes.

In the current work-in-progress, The Shipwrecks of Time, fellows at a small private historical research institute are conducting various studies.  Francis Xavier Delacorte (aka Frank) is off in the Rhineland searching for evidences of "Lost Books," tomes known only by reference to their titles, like Shakespeare's play Cardenio, or Francois Villon's The Devil's Fart.  Most of the books are "cover," since his real interest (or rather, the Institute Director's real interest) is in the lost Peruzzi Manuscript, allegedly written by one Henry of Regensburg in the 14th century and supposedly cursed.  Everybody who gets close to finding it dies.  (A good reason not to look for it, sez TOF; but then a) some folks don't believe in curses and b) there wouldn't be a book then.)

Supradicta, TOF always try to tie in the fiction to the real world as tightly as possible; so e.g., when Frank discovers a letter...


In the Albert-Louis University library, he had also come across a comment in the letters of Ludwig Devrient to Lewis Theobald’s Double Falshood – or – The Distrest Lovers, the purported revision of Shakespeare’s original Cardenio.  Devrient, an accomplished actor and German translator of Shakespeare, had commented dryly that no one should ever desire, let alone need, to revise the English bard.

...you may look up Ludwig Devrient, Lewis Theobald, Double Falshood, the Cardenio, or even the Albert-Louis University and discover that, maybe, just maybe, Devrient could have written just such a letter and that it might be found in just such a library.


It is also a True Fact™ that in Jacob Cnoyen's works is a reference to a lost book called Res gestae Arturi britanni. The heroic deeds of Arthur of Brittany.  This is of no interest for Frank's own research, but his colleague, the cold and aloof Wilma Masterson, is preparing concordances to the Matter of Britain (basically, the Arthurian cycle) and the Matter of France (the cycle of chansons centered on the court of Charlemagne).  This involves identifying and cross-referencing all the significant terms in each extant manuscript copy of the works involved.  A hideous task in 1965/66, requiring index cards and so forth.  No computers with search engines.  How did people live like that?


Okay, so here it is: Frank has found by accident a 28-page portion of the Res gestae Arturi in an archive in Heidelberg and sent it to Wilma, thinking she will be interested.  Of course she is, and notes immediately that it is written in a Merovingian hand in fairly bad vulgate Latin.

The opening line of Liber I runs:

De britanno minor erat autem le fortissimus Arturus in supradicta campo dux.
(Regarding lesser Britain, the most brave Arthur was duke of that "field".)
and she is all caught up in the demonstrative ille becoming the article le and the legal term supradicta pinch-hitting for the demonstrative and campus shifting from "field" to "country or land."


But then she wonders: "Little Britain"?  What if Arthur was dux (Duke, or war-leader) of Brittany, which had been settled on Roman invitation by refugees from Britain, and not of Britain?


Okay, so what I needed was that the missing chronicle should hold something startling, and that just kinda popped into my head.

To make it as real as possible, I decided that the author would be Gregory of Tours, who actually did write the Historia Frankorum.  So I'm glancing through it and come to this:

So in a battle between the Romans and the Goths, the Bretons were involved on the Roman side. 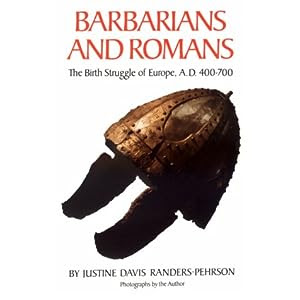 In Randers-Pehrson's Barbarians and Romans, we find that General Aegidius whose Kingdom of Soissons was an island of romanitas in a barbarian sea, did in fact call upon the Bretons, and others when the Visigoths pushed north to the Loire valley.  First, at Angers, they defeated Odoacer and the Saxons; then at Orleans (with Frankish foederati under Childeric) kicked Gothic butt.  Aegidius was then poisoned and the retreating Goths attacked the "Britanni" who seem to have been left in Bourges as rearguard to block such a retreat.  The Goths escaped and Childeric chased the remaining Saxons to the mouth of the Loire, where they were slaughtered.

(Aside: Odoacer will go on to depose the last Western Emperor and make himself king of Italy.  Childeric will father Clovis, who will take Soissons from Syragius, son of Aegidius, and forge Soissons and Austrasia into France.  Basically, Aegidius is why Gaul is called France and not Gothland.)


So far, so good.  It means I can splice Wilma's "discovery" onto actual history.  These events happened about 100 years before Gregory would "write" the res gestae, making it practically yesterday's news.  In the novel, the "heroic deeds" will include a fighting retreat from the Loire back to Brittany.   First stop, Angers, where they pick up a Jutish captain who had deserted Odoacer.  He is described as an "ogre" named "Little-eye."  Since "little" is paulus, that unexpectedly matched with Count Paul of Angers, who was supposedly killed by Childeric after Aegidius died.


Where do they go from Angers?  The logical route takes them to the town of Cavalon.  You can drop the C and figure why my jaw dropped.  Then, looking for a stronghold in Brittany, I found a castle (Villa Anaurot) built by a 5th century British prince near the town of Quimperlé, which in Breton is Kemper Le, the 'confluence of the River Ellé.'  Now say "Kemper Le" and "Camelot" and you can convince yourself that the one might morph into the other; esp. in another language, like English.


Here's the problem.  TOF has managed to half-convince himself that it all actually happened that way.  And he finds he may have been anticipated.  Dang.

Posted by TheOFloinn at 1:21 AM