The diocese of Allentown and the parish of Our Lady of Mercy have thrown in the towel on the possibility of raising the money needed to repair the main church building.  The church, formerly St. Joseph's, was closed two weeks ago and all operations were transferred to the oratory, formerly St. Bernard's.

That the parish had two church buildings may seem odd.  However:
So there were practical and historico-sentimental reasons for keeping both in operation.  Now the large and liturgically rich church will be used only on Christmas and Easter and for Kirchweihe and the like.  Marriages and funerals will be done in it, if requested.


A farewell to old St. Joseph

St. Joseph's formed up in 1852 when the Germans on the Lecha Anhoehe (Lehigh Heights) south of the river decided that it was too difficult to climb down the cliff on stairways, walk along the canal to the bridge, cross over to the north side and climb Gallows Hill, where St. Bernard's was.

The present building is the third church to have been built on that site, formerly called Mt. Tabor.  It is visible on the clifftop from virtually everywhere in town.


Over the course of a century, the German content gradually was diluted.  When my mother brought me in to be baptized, Fr. Fries refused because my name was Flynn.  "Take him to St. Bernard's," he said.  "That's the Irish parish."

Well, the Mut was 100% German and had the German stubbornness.  Her uncles had helped to build the church, and they could take it down the same way.  Either I would be baptized there or she would take me home and baptize me herself under the kitchen sink.  She would have done it, too.  So Fr. Fries gave in.  He was the last native-born German to be pastor of St. Joseph's and was a liturgist of world renown.  When the church building was refreshed for its 75th anniversary, he arranged the whole thing as a catechism, which we will note below.

The first church building was a simple frame church.  It was dedicated by the fourth bishop of Philadelphia, Bishop (now Saint) John Neumann.

At the time it was built, the overwhelming majority of students in the Northampton County public schools spoke German only and most of the rest were bilingual.  (German was still a required course when my mother attended the parish school, and, when I asked her, could still say the Vater Unser in badly accented Deutsch.)

For a while, Easton PA celebrated an annual parade and picnic called Schwabenfest to display the contributions of the Germans to the civic weal.  This included not only sausages and pretzels, but also beer.  At one time the city had three breweries; and there was a pretzel factory on my way home from school in which we would sometimes duck to acquire free scraps from the end of the baking line.  And of course scrapple is still served in most diners hereabouts.  Don't ask.  But we never had to wonder what nanotech people meant when they spoke of "gray goo."

When the first church was outgrown, a second one was built in the high style of the late 19th century. It was nearly twice the size of the first building.

The interior was done up in what might be called 19th century baroque, with a statue for every occasion. 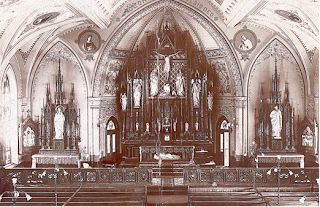 The church my mother's uncles built

The second church was destroyed in a fire that my father's father could see from New Jersey.  The City immediately offered to let the parish use Porter School for church services.  It is impossible to imagine a governmental entity doing that today.

But a new building was immediately planned and erected in four years.  First the school, then the church.

The new church was constructed entirely of Stockton granite and was considered to be practically fire proofed.  It is 140.5 by 75 feet in size.  Instead of a single, pointed spire, it bears twin towers capped with terra cotta domes modeled on the Munich Frauenkirche (Church of Our Lady). 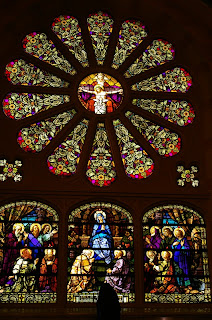 Overall, it is a gothic-romanesque hybrid.  with a long barrel vault leading to a semi-domed apse.  The transcept is short and once held two side altars.  At the ends of the transcept are two rose windows, once with a triptych of the Nativity, the other with one of the Pentecost.  The stained glass windows are in the Gothic revival style of Munich glassmakers a century ago, featuring robust figures and containing symbolic elements.  In the nave, each window on the south side features an episode from the life of St. Joseph and on the north side various roles of St. Joseph.  In the choir loft, the two windows show David as the psalmist and Gregory the Great as in Gregorian chant.  The four windows in the sanctuary show four Old Testament prefigures of the Eucharist.

The arrangement of the sanctuary is deliberate.  In the photo below, start with the Eye in the dome and drop a vertical line.  The eye is God the Father.  On the front of the canopy (and thus "proceeding outward") is a dove representing the Spirit.  The canopy covers the Son on the cross.  The line then drops through a bas relief of the Last Supper, the Tabernacle, and the altar.  The theological point is hard to miss.

Speaking of crosses, there are two horizontal lines.  If you follow the outstretched arms of Christ on the cross, you find the windows depicting Eucharistic prefigures.  But a second horizontal line runs through the bas relief of the Last Supper.  Across the backdrop are iconographic depictions of the other six sacraments; and below these two circular mosaics: one depicting Eve and the apple, the other depicting Mary and an apple.  These symbolize the fall and the redemption.  These were mirrored by the twin pulpits, one with a medallion of St. Paul being struck on the road to Damascus and the other with Christ teaching a disciple.  In the old days, the epistle was read from one and the gospel from the other.

Vatican II did surprisingly little harm to the symbolism.  The tabernacle was moved off to the right hand altar and the celebrant's chair was placed in-line.  This is apropos given his role in loco Christi, but to my way of thinking less satisfactory.  The Eye representing God the Father was removed later for unrelated reasons.  (Some children said it scared them.  The nuns in my day would have said, "Good.  Keep that in mind."  I was a kid once, but I just thought it was kool beans.)  However, a blank dome is also a satisfactory representation of a being who cannot really be depicted.  The dome has seven panels to represent creation.  There ought to have been a Michelangelo to paint each day across it.