The Odd Ends of Odds and Ends

Yes, it's that time again.  Clearing out bunch of ends and odds.


The Little Ironies of Life

A fellow in the UK who loves animals, but not so much as he is willing to live with them in his house, trapped a troublesome mouse.  Rather than exterminate the dirty little vermin -- perhaps he was influenced by too many Disney cartoons in his youth -- he took it to a nearby public park and released it.

A friend who had accompanied captured the liberation on his cellphone camera.  Within moments of Mickey's release, a hawk swooped out down, seized it, and flew off with the dinner.


Life Used to be So Much Simpler

A Topeka man answered a CraigsList ad for a sperm donor placed by two lesbians who wanted to pretend that they had had a baby together.  He donated the sperm for free and the two women made him sign a contract in which he was barred from ever seeking any parental rights.  Well, you guessed it.  The two lesbians got "divorced" and the birth mother, falling on hard times, sought public relief, and the State of Kansas tracked down the sperm donor and is dunning him for child support payments.
Some of us recollect that, civilly, marriage was a contract between a copulating couple and the State that the couple (and not the State) would pay for the upbringing of any child that might result from their activities.  It reminds me of "dalliance songs" in folk music, only without the momentary pleasures of the dalliance.
Speaking of the Product of Dalliance
The Guardian contemplates the consequences of sex with children and recollects that


In 1976 the National Council for Civil Liberties, the respectable (and responsible) pressure group now known as Liberty, made a submission to parliament's criminal law revision committee. It caused barely a ripple. "Childhood sexual experiences, willingly engaged in with an adult," it read, "result in no identifiable damage … The real need is a change in the attitude which assumes that all cases of paedophilia result in lasting damage."

Used to be, too, that publicizing such incidents were thought to do more harm to the child than keeping quiet about it, and that counseling could cure the offender.  All the counselors said so.   Charges were not brought unless the parents insisted on it.  It is hard to imagine in the present era of resurgent Calvinism in which people do not so much commit sins as they are irredeemably sinful, but folks who relied on the Best Professional Advice in one decade might be pilloried for having done so in another.


The Music of a Generation

James Chastek makes an interesting point about a generation's music.  What they grow up listening to may be quite different from the music they go on to create:

All that peace-and-love music of the Sixties was created and performed by members of the Silent Generation.  (Chuck Berry, man, he was only a little younger than my Dad!  So he was older than the Silents.)  The Boomers listened, grooved to it, and then went on to lay waste to it.


Hot Enough For Ya?

If not, we can make it hotter.

One gets used to the temperatures growing warmer, but it is harder to contemplate past temperatures getting warmer or cooler, ex post facto as it were.  The chart shows the amount of adjustment made to previous temperatures between the 2008 GISS report and the 2013 report.  Curiously, nearly all the recorded anomalies prior to 1965 have been adjusted to be lower than they were reported in 2008 while those after about 1975 have been adjusted to be higher than they were reported to be in 2008.  That is, 1991, say, was warmer in 2013 than it was in 2008, which cannot but arouse a certain degree of wonderment. 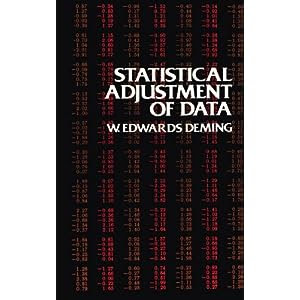 BTW, data adjustment can be perfectly legitimate.  You will notice the notice at the top of each data sheet: "using elimination of outliers and homogeneity adjustment."  What changed between 2008 and 2013 was the nature of the homogeneity adjustment.  They got a new tweak on.  It has added about a 0.1° to the slope of the trend line since 1900.

Deming gave the example of the measurements of the angles of a triangular plot of land whose sum totaled less than 180°.  But since such a sum must equal 180°, it is perfectly legitimate to add the deficit into the raw data.  There are (at least) two different ways of doing this: a) add ⅓ of the deficit to each angle; b) add a proportionate share of the deficit to each angle based on the size of the angle.  There are circumstances when a) is appropriate and when b) is appropriate.  What is never appropriate (from the statistician's POV) is to blindly apply one sort of adjustment in all circumstances by means of an automated algorithm.


Return of the Quanta

Speaking of Chastek, he has a nice discussion of why they mythical causeless quantum events might refute Einstein or Bohm -- or for that matter, materialists -- but don't lay a glove on Aristotle or Aquinas.  Both fellows were quite aware of coincidence and chance events Apparently, there are these people out there who think that if you cannot predict when and where a virtual "particle" pops into and out of existence that the virtual particle therefore has no efficient cause.  But the efficacy of a cause has nothing to do with its predictability.  Gravitational theory cannot predict which apple will fall on Newton's head and when.  Time (t) does not appear anywhere in the equations, except insofar as the apple is already in motion.  Quantum mechanics likewise eschews the term t.  In neither case does it mean that there is no cause to the event of an apple detaching from a branch or a virtual particle virtually existing for a virtual moment.  These "particles" are a superposition of quantum states, so it is evident that the particle is caused by the quantum states that are logically prior.

It is not even clear in what manner they exist.  Wikipedia says


they appear in calculations of interactions, but never as asymptotic states or indices to the scattering matrix. As such the accuracy and use of virtual particles in calculations is firmly established, but their "reality" or existence is a question of philosophy rather than science.

Which to this aged ear sounds an awful lot like deferents, equants, and epicycles, the accuracy and use of which in calculations was firmly established: purely mathematical devices used to "save the appearances," but which might or might not have physical existence.  It's not entirely clear whether something that does not physically exist needs to have a cause.

Random events are the result of the intersection of two or more causal lines.  We have used the example before, but recall the hammer sliding off a roof that brained the unlucky office worker walking toward his favorite luncheonette.  Everything in the worldline of the hammer is caused: the geometrical position of the hammer, the nudging of the roofer's foot, the coefficient of friction of the roofing tiles, the slope of the roof, the acceleration of gravity, and the kinetic energy of the fall.  Everything in the office clerk's worldline is caused: he is hungry, it is lunchtime, he chooses to eat at his favorite luncheonette, he walks at a certain pace along a certain street, and....  It is only chance that he is under the hammer when it falls.  The two worldlines cross -- and there is no reason why they ought to have crossed any more than there is a reason why you should be reading this while sipping a cup of your favorite beverage.  Correlation is not causation.

Our unfortunate's death is caused indeed by the hammer, but there is no ratio, no reason, no law of nature that requires hammers to brain pedestrians, let alone to predictably brain this pedestrian at this particular time and place.

Then, too, genuine randomness, should it ever be encountered, is a fair to middling argument for design with tongue not entirely all the way into the cheek.

Posted by TheOFloinn at 3:35 PM