Inflation Put the Hindenberg in the Air

Stuart Rojstaczer and Christopher Healy tracked grades at numerous colleges from 1903 to 2006.The plot is here: 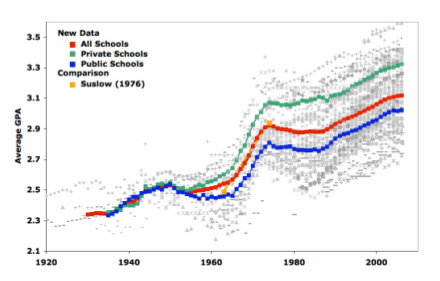 Each gray dot is the average grade awarded at one university for one year. (The number of universities included in the analysis has also been increasing.) By 1970 or so, as TOF reads the chart, the lowest university average was higher than the highest such average in the 1950s. This at a time when admissions were increasing for all classes of the population.  One possibility is that college students in the mid-late 1960s got suddenly smarter than their older brothers and sisters. As a college students from the mid-late 1960s, TOF finds this an attractive possibility; but it fails to account for the steady state 1975-85 and the second, slower rise beginning after 1985.

The study authors have this to say:

The rise in grades in the 1960s correlates with the social upheavals of the Vietnam War. It was followed by a decade period of static to falling grades. The cause of the renewal of grade inflation, which began in the 1980s and has yet to end, is subject to debate, but it is difficult to ascribe this rise in grades to increases in student achievement. Students’ entrance test scores have not increased (College Board, 2007), students are increasingly disengaged from their studies (Saenz et al., 2007), and the literacy of graduates has declined (Kutner et al., 2006). A likely influence is the emergence of the now common practice of requiring student-based evaluations of college teachers. Whatever the cause, colleges and universities are on average grading easier than ever before

Posted by TheOFloinn at 6:54 PM