The newspaper here runs a feature that reports on stories covered "100 years ago today" as well as 50 and 25.  We note in passing that today is the birthday of a man with many devoted followers; viz., Jimmy Buffet.

In any case, both yesterday and today the 100 Years Ago feature mentioned marvelous putzes. Yesterday's was a putz set up by the South Side boy scouts, and today's was set up by the Central Fire Station.  Both items mentioned how wonderfully detailed the putzes were and TOF was transported to his youth when Christmas time meant a lot of putzing around as we trooped from house to house to view people's putzes.
#


The Moravians hereabout are still big on this, but it was more broadly a German thing and while putzen means to decorate or adorn, "a putz" more specifically refers to the elaborate Christmas villages that people used to (and sometimes still) set up to augment their creche sets.

Many of these in TOFs youth included miniature train sets, albeit anachronistically. 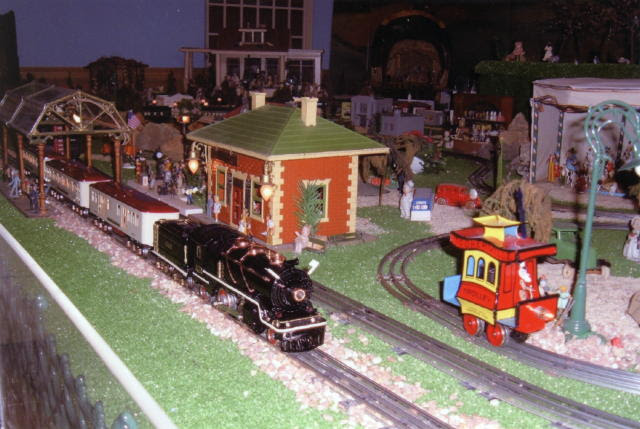 TOF's Pere used to set up an HO-gauge town complete with plaster cars and people and cardboard and cellophane buildings. It was not a very elaborate set: two oval tracks with a double switch to enable trains to move from the inner to the outer oval and back.

The Mut had an expression she liked to use with respect to TOF and brother Dennis: "Quit putzing around." It's practical meaning was that we kids were heel-dragging or going about aimlessly.  The meaning evidently derived from the German custom of going about on Christmas Day to view one another's putzes. Mut's family was a fecund one, which gave many destinations for the putz parade.  Here is a picture of Mut's grandparents and her uncles and aunts:
Then there were other German families on the Heights, many of whose forerunners came from the same two villages of Oberhausen and Niederhausen (now combined as the Gemeinde of Rheinhausen) in what was then the Grand Principality of Baden.  The Heights wasn't called German Hill for nothing.  So the community was pretty large, even if you only visited relatives. TOF's cousin and Milchgeschwister, Mariellen, once said that whenever she was introduced to someone new she always assumed she was related in some fashion to this new person.

The custom has alas diminished. When TOF was a youth every residence on his block was German -- and three were relatives. Today, there is only one relative on the block, and a host of non-Germans.

#
An excerpt from Eifelheim regarding Nativity sets:

The monks at St. Martin’s Church were assembling a large crèche in the sanctuary.  Francis of Assisi had begun the custom of building a Christmas crèche, and its popularity had lately spread to the Germanies.
“We start placing figures after Martinmas,” the prior explained.  The Feast of St. Martin would mark the popular beginning of the Christmas season, though not the liturgical one.  “First, the animals.  Then, on Christmas Vigil-night, the Holy Family; on Christmas day, the Shepherds; and finally on Epiphany, the Wise Men.”
“Certain church fathers,” Dietrich said, “ascribed the Nativity to March, which would be more reasonable than December if shepherds were watching their flocks by night.”
The monks paused in their labors and looked at each other.  They laughed.  “It’s what happened that matters, not when it happened,” the prior told him.
Dietrich had no answer, only that it was the sort of historical irony that had appealed to students in Paris and he was no longer a student and this was not Paris.  “The calendar is wrong in any case,” he said.
“As Bacon and Grosseteste showed,” the prior agreed.  “Franciscans are not backward in natural philosophy.  ‘Only the man learned in nature truly understands the Spirit, since he uncovers the Spirit where it lies – in the heart of nature.’”
Dietrich shrugged.  “I intended a jest, not a criticism.  Everyone talks about the calendar, but no one does anything to fix it.”  In fact, since the Incarnation signified the beginning of a new era, it had been symbolically assigned to March 25th, New Year’s Day, and December 25th necessarily fell nine months after.  Dietrich nodded at the crèche.  “In any case, a pretty display.”
“It is not ‘a pretty display,’” the prior admonished him, “but a dread and solemn warning to the mighty: ‘Behold your God: a poor and helpless child!’”
#

A "dread and solemn warning"?  Perhaps we are not looking on these things properly anymore.