Chapter 7. The Allegory of the Check Sorting Process

"Yeah.  You remember checks," the old curmudgeon said. "They were rectangular pieces of paper on which people promised, no foolin', that they had the money in the back to cover a payment."

Jack scowled.  "I know what a check is."

"More like was.  It's like printing with ink on hot lead.  They were printing that way since Gutenberg, and in an instant it was all gone.  An entire industry, a whole technology.  Pfft."  He snapped his fingers. 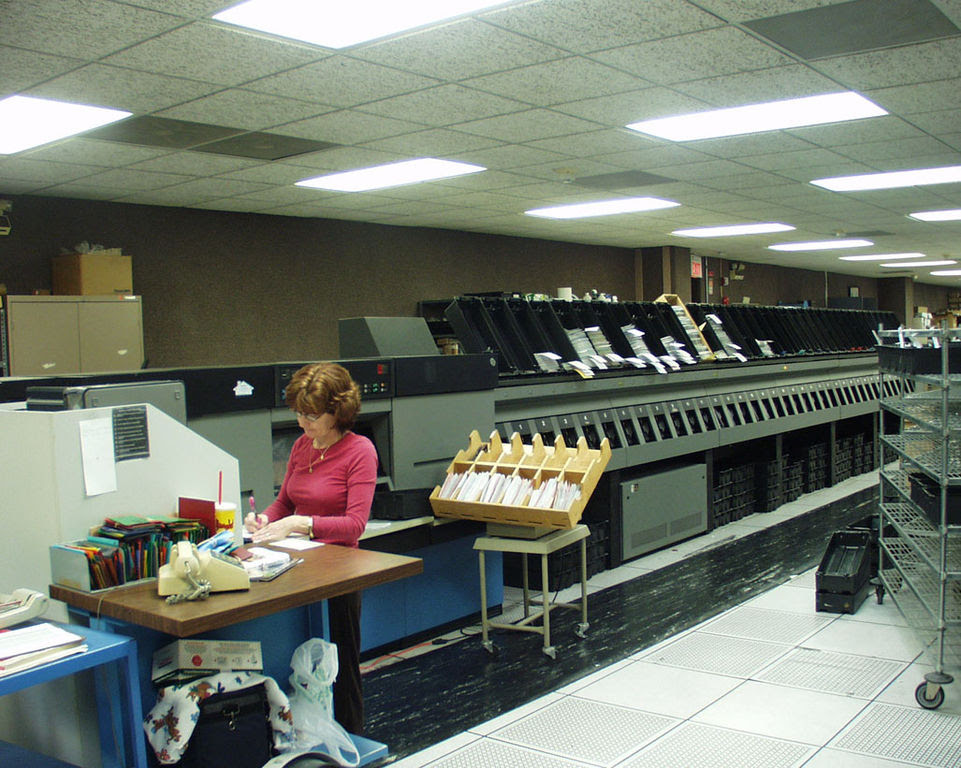 "Oh, yeah."  The curmudgeon pulled on his jacket and pulled a cloth cap down over his head.

In check processing, various depositors bring in checks drawn on different banks for deposit to their accounts.  Their bank's problem is to get these checks back to the other banks that issued them so they can get the cash behind them.  In the olden dayes, they gave packets to messengers, who ran about Manhattan hand-carrying the checks back to the issuing banks.  Then one day some of these messengers decided it would be simpler if they all met at a tavern someplace, hoisted a few, exchanged checks, and then went back to base. The result was the Bank Clearinghouse.

So the banks send bags of unsorted checks to the clearinghouse with an accounting of the amounts.  The Clearinghouse identifies and tracks the amounts, runs the check through a sorting machine that reads the bank routing number in the lower left corner of the check and tips it into an assigned pocket.  Then it bundles the checks from each pocket and sends them back to the issuing bank with a 'cash letter' accounting for the amounts.

"Nice to see he was on top of things," Jack commented drily.

This was a large enough increase that even vice presidents notice. So he did what managers always do when faced with the Dread Unknown.

He formed a Task Force.

It was called the "Quality Control Task Force" and he told them to find out who was screwing up so he could put the fear of God into them.  He gave them a Goal: 5 errors per 100,000 checks.  He was what we called a "Theory X" manager.

Now, none of the task force members was trained in problem solving and quality control. This was a bank, remember, and this was many years ago in the Days of Yore. However, one member knew someone who was an expert in quality control.  How did she know this?  She'd been married to him for a number of years.

So she comes home from work one day and says, "Put your money where your mouth is. We don't even know where to start."

And he gave her what has been called Flynn's Immortal Advice on Problem-Solving, which is: "Start Somewhere."

But the thing is: when you don't know anything about a problem, whatever you learn puts you ahead. What did I tell you was the first step in the Diagnostic Journey?

"That's right.  What is the size and shape of the problem. Look at it from Many Points of View.  One or more of these points of view is likely to give you a clue."

"Who's this Flynn character?"

"Just some blowhard statistician. He writes killer SF, though.  I'll give him that.  You ought to buy his stuff.  Meanwhile..."

"Wait for it," said the curmudgeon. 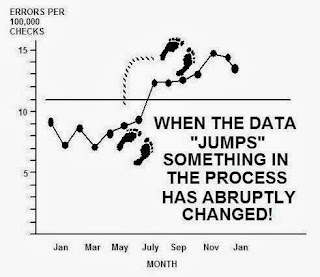 They also looked at Time.  When did the problem begin?  They plotted the monthly data on a time plot, and it looked like the chart on the right.  Causes make footprints in the data.  The footprint here was a sudden jump and the rule is that when your data suddenly jumps, something in the process has suddenly changed.

So she took the chart and showed it to her husband.

"What was in that memo the vice president issued in July?" he said.

"How did you know about that memo?"

"No, really." She wasn't buying the genius part.  So he relented. 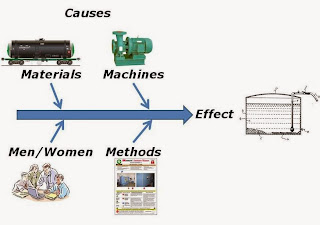 "You already know that there are no differences among machines and operators. How can the same people doing the same job with the same equipment and materials suddenly in one month forget how to do it right?

That took care of Materials (the checks were the same), Machines (the sorters were the same), the Men and Women (there had been no turnover).  The room was the same, too.  Let's call that Milieu.  That left Methods.  The answer had to lie in a change in the way of doing the work.  The first method to suspect is always the method of measurement, and it turned out that the vice-president's memo had changed how a certain error was counted. Previously, a Mis-Sent Cash Bundle had counted as one error. The vice-president changed that to counting every check in the bundle as an error.

"It wasn't really a screw up.  It's just a different way of counting.  The problem was that after July they weren't really counting the same things. It was a Great Big Fat False Alarm, or GBFFA.  But the were smart.  They didn't back the VP into a corner.  Instead, they did what we now call "lean" and found a lot of efficiency improvements and 'Oh, by the way, we're counting defects differently now...' That gave the poor guy a fig leaf to rescind the memo."

"Oh, the error rates dropped right back down to a mean of 8.5, where it had been for at least the previous three years."

"They never got close to the Goal of 5?"

The old curmudgeon smiled but said nothing.

"I see that the Goal of 5 didn't help them diagnose the problem," Jack admitted, "and it didn't even help them propose a remedy. It really was irrelevant. That was worth the price of lunch."

By now the two men were standing outside the restaurant while Jack waited for the valet to bring his car around. "What eventually did happen?" he asked out of curiosity.

Grumpy waved a hand. "Oh, they bought a new generation of IBM check-reading machines. The error rate dropped to 3 per 100,000 because of the improved capability. They ought to have gone back and made more errors."

Jack laughed. "Well, I'll see what I can do with this on the storage tank... I mean, the demurrage problem."  He held out a hand and Grumpy took it.  "If I run into you again, I'll let you know how it turns out."

"Who knows," the old man allowed. "Stranger things have happened."