The Autumn of the Modern Ages: Preface

This is the first of a series of posts on the collapse of the Modern Ages. It uses as its starting point, John Lukacs' essay, At the End of an Age. It was originally envisioned as a fact article for ANALOG, but it became way too long for that. However, as TOF transcribed the final portions of these posts, he realized that he might be able to salvage one part of it: the Autumn of Modern Science for such an article, and so that is reserved from this series.

TOF also notices in Preview-view that there are whimsical font changes throughout which he has not been able to correct. Go figure.


The Autumn of the Modern Ages
by Michael F. Flynn


“When the world was half a thousand years younger…”
So began Johan Huizinga’s portrait of the 15th century world: The Autumn of the Middle Ages. “Autumn,” because if the medieval world was fading, it “faded” in a burst of color and drama, and its passing was also a birth: The Renaissance.  [JH]
It wasn’t the first time the West had pulled off this re-birth thingie.  When the world was half a thousand years younger still, Europe had once before been transformed – and more happily so, for the 10th century had seen, in the revival of commerce and town life, in a renewed thirst for knowledge, the fading of a genuinely desperate era.  And five hundred years before that, in “the autumn of late antiquity,” people like Boëthius or St. Augustine would later rightly be styled the last of the Romans and the first of the medievals.  [PB].
There is nothing magical about that 500-year interval, but…  Another half millennium back and Caesar crosses the Rubicon and the decaying Republic ends in an Augustan rebirth bright enough that men fifteen centuries after found themselves blinded by its light.
And a half-millennium forward of the Renaissance brings us to…
Well, today.

And the Latin for “today” gave us the word modern, and the name of an Age.  The Modern Age was born a little before its name, because these rebirths have a way of sneaking up on us, and we don’t usually cast about for a moniker until after it’s been around a while.  The medievals never called themselves medieval – until Petrarch decided to become the first post-medieval and needed a name to put down his predecessors.[1]
We usually date the Modern Ages symbolically from 1492, and modern appeared in English ca. 1580.  It quickly took on overtones: not only the Age of Today, but also “the Age of the New,” “the Age That is Not Old-Fashioned,” “the Age of What’s Happening Now, Baby.”  Not by chance did the term progress shift at the same time from “forward spatial motion” to include “forward temporal motion.”  Onward!  Newer!  Better!
A certain historical conciousness raised its pointy little head. History as "a formal record" appeared in 1482, historian fifty years after.  In short order, century began to mean 100 years instead of 100 people, and bit by bit, contemporary, decade, epoch, evolution, and development. Later: anachronism.
Along with the new outlook came a new in-look. Self- words appeared as the Modern Ages progressed: self-love, self-esteem, self-pity arose in the 17th century; ego and egoism a little later
Boëthius did not know he would be called the “last of the Romans,” but he did sense that something was passing away.  Hence, his haste to translate as much Greek philosophy as he could into Latin before Gothic politics cut things short.  (Literally: he was beheaded.) It’s not clear who “the last of the Moderns” was, but starting just over a half-century ago, certain thinkers began to sense that our era was drawing to an end.  Romano Guardini wrote The End of the Modern World in 1950, followed by Jacques Barzun, The House of Intellect, in 1959 [JB].  In 1970, the historian John Lukacs picked up the theme in The Passing of the Modern Age [JL1].  At the same time, startled by the Great Northeast Blackout of 1965, electrical engineer Roberto Vacca wrote The Coming Dark Age [RV].  Walker Percy wrote of the end of the age in “The Delta Factor” in 1975 [WP].  Lukacs revisited At the End of an Age in 2002 [JL2] and Jane Jacobs warned us of Dark Age Ahead in 2004 [JJ].  A few years later Maggie Jackson wrote Distracted: The Erosion of Attention and the Coming Dark Age.  The term “post modern” made a dramatic entrance.


Figure 1.  Frequency of the term “post modern” in English-language sources, per http://ngrams.googlelabs.com [JP]

For Vacca, collapse was purely technological: in an increasingly complex and interdependent infrastructure, a single component failure could crash entire systems.  His book gave Isaac Asimov “a palsied fascination of horror.”  Fair enough.  We in science fiction tend to equate a civilization with its technology.  But as Georges Bernanos wrote: “A civilization disappears with the kind of man, the type of humanity, that has issued from it.”  That is the subject of this essay.

Whatever the medieval faults, they went with one merit.  Medieval people never worried about being medieval; and modern people do worry horribly about being modern.”
– G.K. Chesterton, “On Turnpikes and Medievalism”

Dark Ages Before the Dawns

Jane Jacobs wrote that a Dark Age is when we not only forget what we once could do, but we forget that we had ever done it.  Will the passing of the Modern Age result in another Dark Age, with barbarians roaming through our cities?  The World of Late Antiquity slid into such a Dark Age; but the Middle Ages slid into a Renaissance.  It is hard to say which was the greater catastrophe.  “The Renaissance was decadence!” Henri Matisse famously declared.  But then some regarded Matisse as one of the barbarians.
An age seems dark only in the light of other days – or in delight of other days.  Renaissance humanists, enamored of Periclean Greece and Augustan Rome, saw the intervening “Middle” Age as dark.  They presumed that the medievals had wanted to imitate Greek art but had been too inept to pull it off [RP].  By their own lights, the medievals could see just fine.  As one wag put it, because we can watch Paris Hilton on high def, we look down our noses on the people who invented the university.
Even the 5th – 8th centuries may have been less dark than we suppose.  The Early Medievals wrote plenty of things down, but the Saracens, Vikings, and Magyars kept burning them up.  Fragments glimmer in the shipwrecks of time: In the 8th century, Pépin le Bref petitioned the Pope for Greek texts, and Paul I responded with “liturgical books, manuals of grammar and orthography, of geometry [and] works of Aristotle and pseudo-Dionysius” plus “men capable of translating them.”  Not bad for the Dark Age.  Peter Brown has argued that it was more a smooth transition [PB], as has Sylvain Gouguenheim.[2]  And some have even argued that it was an improvement [LS].  The Dark Age was less a loss of learning – though some loss did occur – and less a matter of barbarians – though one cannot help but notice the barbarians running about – than it was a loss of the documentation.  We may already live in a Dark Age.  Who in five hundred years will know how to read a CD?  The disks we burn today may as well be manuscripts burned by the Vikings.
Well, the world is always going to hell in a hand basket.  And sometimes it really does.  But then sometimes Hell turns out to be not so bad, once you get used to the heat.  An age is too complex a thing to assign a simple “thumbs up” or “thumbs down.”
What has this to do with Science Fiction?
We have less trouble imagining future technologies than we have imagining futures.  In the 1950s, the future was the 1950s – with flying cars!  Postcards from 1900 portrayed “the world in 2000” with televisions, audiobooks, air travel – all engaged in by people in 1900 garb doing 1900 things.  But the future will be informed less by the kinds of gadgets people use than by the kinds of people who use the gadgets. 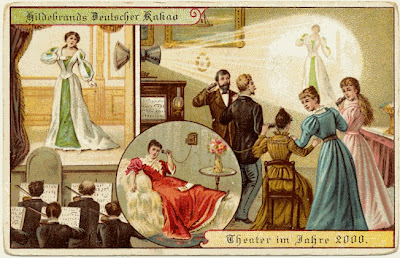 The Entrails of the Modern Age

[O]ne of the games to which [the human race] is most attached is called … “Cheat the Prophet.”  The players listen very carefully and respectfully to all that the clever men have to say about what is to happen in the next generation.  The players then wait until all the clever men are dead, and bury them nicely.  Then they go and do something else.  That is all.  For a race of simple tastes, however, it is great fun.
– G.K. Chesterton, The Napoleon of Notting Hill
The Modern Age had a number of distinct dimensions [JL2].  It was the Age of Europe, the Age of the Bourgeois, of the State, of Money and Industry, of the City, of Privacy, Family, and Schooling.  It was the Age of the Book, of Representative Art, of Science, and of Secularism.  All of this began to brew up five hundred years ago, and all of it is losing its fizz today.
If you love modernity, its fading is a tragedy.  But the number of lovers has been shrinking (else the age would not be fading).  So whether you shout “Good riddance!” or cry “Oh, dear!” let’s “examine the auspices.”

Continued on next rock


[1] Petrarch crowned himself “poet laureate” in 1341, declaring himself the first real poet since antiquity.  Dante, dead for twenty years, was unable to object.
[2] Gouguenheim’s book is not yet available in English, so I am relying on reviews and other comments.

Labels: autumn of the modern ages