If every person is the hero of his own story, then every country is the center of the world. Geography is not fate, but it will often do until Fate comes a-knocking on the door, so what does Russia look like when the world is centered on it? 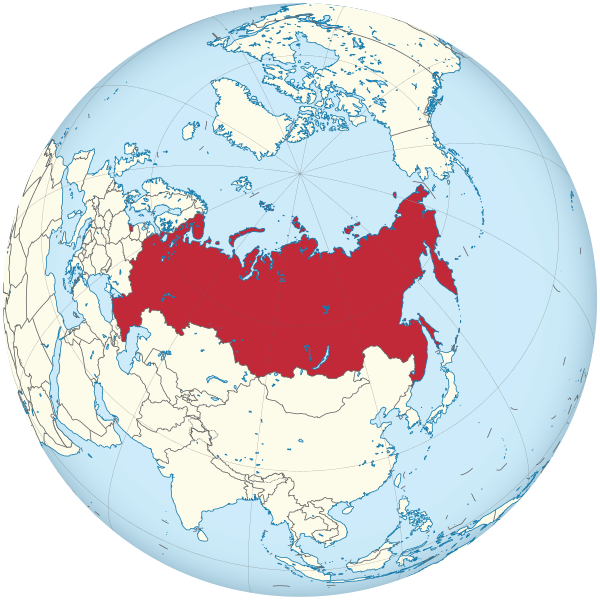 That's right. The Rodina is surrounded by unfriendlies. To the north (across the Pole) is  Canada backed by the US. To the east is the US (Alaska). To the south are Japan, China, the muslim world (esp. her ancient enemy, Turkey); to the west, the Europeans. All of them are to some degree hostile to Russia.

Worse, those neighbors keep shouldering in, like cowboys in a saloon. Muslims are moving into Russia from the south, esp. from the Caucasus. (And Russia was the traditional champion of orthodox Christians in the muslim world, esp. the Balkans.)

America is muscling in from the west, admitting all the countries on the border (the "Near Abroad") into NATO. Ostensibly, this is to guard against a Russian invasion of Europe, but from the Russian POV it is the West putting its military assets on her front doorstep.

When the Soviet Union was in business, this might have made sense, because Communism was an expansionist ideology with dreams of world domination. But since the collapse of the USSR, Russia has rejoined history. Yet without a European enemy, NATO would be obsolete, and so Russia becomes the Designated Enemy.


"Russia is an economically challenged nation of 145 million, less than half of Europe’s population and much less than half of America’s. Its economy is a small fraction of the combined economies of Europe and America." -- Fred on Everything

The notion that Russia is in any position to attack wealthy enemies collectively four times her size, casts Putin as a fool. He may be many things, but he is not a fool. Instead, the Russians have watched with unease as NATO creeps closer and closer to the Motherland. That may not be what it looks like to us, but this is about what the world looks like to Russia.

Traditionally, Russia has dealt with this encirclement by two means:
With Eastern Europe having thrown off the Internationale, Russia has established a new Near Abroad: viz., Belarus and the Ukraine. This is unsatisfying, since both countries were traditionally part of the Russian State.

This makes the the entry of Ukraine into the NATO alliance rather scary from the Russia POV. It's almost as if the US were trying to goad Russia into hostilities. That started with Albright's War to separate Kosovo from Serbia because the Serbian homeland had been swarmed by Albanians. This culminated in the encounter at the Pristina Airport. Later, when Mrs. Clinton became Secretary of State, there was a photo op of her and the Russian Ambassador pressing a toy plastic "reset" button to symbolize a "reset" of Russo-American relations. The Russian word on the button was spelled in Latin letters rather than Cyrilic, and actually meant "overloaded" or "overcharged" rather than "reset." This caused great amusement among the Russians, and not a little contempt. Fortunately, Mrs. Clinton was not Donald Trump, so no one made any comments about getting cozy with Putin or some such thing.

The 2014 regime change in the Ukraine further disturbed the Russians. The democratically-elected government in that country was overthrown in a US-sponsored coup. The new government, by wild coincidence, asked for admittance to NATO. The Russian Black Sea Fleet has been based in Svastopol in the Crimea since Tsarist days, but the post-coup government in the Ukraine was interfering in operation of the base and shipyard.

Throw in the attempted regime change in Syria, in which the US was more focused on overthrowing Assad than with combating ISIS and in which the US became de facto allies with ISIS. Russia had been a long-time backer of the regime and was flying air strikes against ISIS and other revel strongholds, so Mrs. Clinton's proposal to impose a no-fly zone would risk a direct aerial confrontation with seriously ticked off Russians. (They had never regarded ISIS as the "junior varsity.")

About that 145 million-and-declining population. Russians with enough fingers and toes can do population math and see a day when the Motherland's native population will implode because they are not reproducing themselves. There will be no Caliphate of Moscow -- but there may well be a Khanate of Moscow in the future. It's the Turks, not the Arabs that have bugged Russia since the days of the Golden Horde (and Turkey seems to be shrugging off its Kemelist secularism these days. They recently staged their own burning of the Reichstag event.)

There are a lot of Russians in the Crimea and the eastern Ukraine. This region was hacked off the RSFSR (Russia-in-the-Soviet Union) by the Georgian tyrant Stalin in an effort to denationalize the Soviet republics.Borders were moved; whole peoples relocated.