The Feasts of December (3)

There follows a span of time for which photographs have not been digitized. After the Beast bit the dust, getting back and forth proved problematical and TOF told Sweet Sharon that she should date other guys rather than sit around waiting to see if TOF would make it back. Eventually, TOF heard that she had been wed to another. Although TOF dated casually afterward, it was not until years afterward that he found another who was her equal.

After graduating with a BA in mathematics TOF proceeded to Milwaukee where he studied for a Masters in mathematics at Marquette University under J. Douglas Harris. While there, TOF lived in a sort of urban commune, one of the communards becoming the inspiration for The O'Neil in the Irish Pub stories and the Irish Pub we frequented becoming fictionalized as the setting thereto. The commune, somewhat modified as to its inhabitants, is currently undergoing rehearsals as the setting for The Shipwrecks of Time.

His work in General Topology led TOF to write a Masters thesis entitled "Universal Range Spaces and Function Space Topologies," a real wowser for which he expects the movie rights to be bought Real Soon Now. It was, however, published in a real, live mathematics journal. Woo hoo.

He had begun dating a girl named Maria, a native of Austria, and it seemed to be going somewhere, save she was probably not going to Colorado when TOF graduated and left town. Then two of the communards brought a coworker to dinner one day and although it is a cliche to say so, when she sat across the High Table from TOF and TOF looked into her smile, he just knew that she was the One. Her name was Margie. There were only two minor difficulties. TOF was already seeing Maria and Margie was already seeing Rich Old Elliot.

But difficulties are for overcoming, and upon graduation from Marquette, with a spanking new Masters degree and a Graduate assistantship waiting at Univ. of Colorado, Boulder, the newlyweds climbed in the back of a friend's van, surrounded by boxes of books and records in the approved 60s fashion and heighed for the Rocky Mountains. Despite predictions by those bemused at the suddenness of it all, they are still at it, 46 years later. 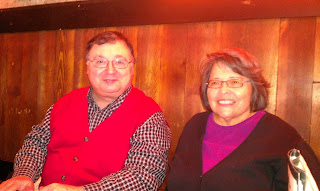 After that, one thing followed another:


Following a PhD interlude best passed over in silence, TOF spent eleven years as a quality engineer and applied statistician at Coors Container Company in Golden CO, engaged in problem-solving, experimental design, and other such activities. Again, there are few digitized photographs of this era. Following this, his head was hunted by STAT-A-MATRIX, a consulting and training firm then in Edison NJ, and for whom he engaged with various clients on sundry continents, including the Panama Canal Authority, ITC (Chennai, India), Reckitt-Benckiser (Johannesburg, Chartres, Australia, Hull), IAEA Safeguards (Vienna), NASA, et al. on quality management systems, statistical analysis, quality improvement, etc.
Already while working at Coors, TOF had begun selling stories to Analog Science Fiction, the first one being "Slan Libh," (Nov 1984)

But TOF has also written a number of novels:

Posted by TheOFloinn at 2:55 AM