Now this is a common enough literary trope -- reversal of expectations -- but the matter was already becoming politicized and so reaction to the book was largely political, even though a closer inspection of the premise reveals that it accepts the fact that carbon dioxide does tend to warm the earth.  It simply supposes that Other Stuff is going on at the same time; viz., another ice age is starting and global warming is staving it off.  Remember, this was just at the tail end of the Global Cooling hoo-hah, a phase of history now falling into George Orwell's "memory hole."

Why CO2 Matters
Carbon dioxide is necessary for plant photosynthesis.  Below 100 ppm, the cycle tends to shut down.  For much of geological history, the CO2 concentration in our atmosphere has been far in excess of today: e.g., in the Carboniferous and Jurassic periods, and plant life flourished.  Most of human history, however, has been spent in the current inter-glacial period, which is colder and more carbon-poor, running 170 ppm, very close to the edge.  But since 1800, this has been increasing and is now around 300 ppm, a more comfortable margin.  Some of this is due to industrial activity by Evil Western Scientific-Technological Civilization.  But, plant life is not flourishing as mush as it ought, and so some of the increase is likely due to depletion of soil minerals that are also crucial to photosynthesis.  If we would only stop growing food and making stuff, we might return matters to the bleak, cold, CO2-poor world of the past.

Butit is also the case that as the oceans grow warmer, they can hold less CO2 in solution, so some of the increased atmospheric CO2 may be a result of the warmer temperatures, rather than a cause of them.  Life is complicated.
+ + +

The Solar Grand Max
Unlike carefully controlled lab experiments, the Real World™ is a hodge-podge (or even a podge-hodge) of uncontrolled variables, making it difficult to separate out the effects when they change concurrently.  Replicated experiments are not possible because "you only go around once in life" and "tomorrow is another day."  And "another day" means things will not be the same a second time.

So one of the things that has been coincident with increasing CO2 levels has been increasing solar activity.  The Solar Grand Max coincided with the Global Warming period.  The sun began ramping up about 300 years ago at the end of the Maunder Minimum and has been on "high burner" for the past sixty years plus.  By some amazing coincidence, this was also when the world shrugged out of its Little Ice Age and began returning toward medieval levels.   There was only one thing that Political Science could do.

They denied the Medieval Warm Period (and Roman Warm and Minoan Warm) had even happened, and insisted that the Little Ice Age was a local European phenomenon, or both.  Neither claim has withstood scrutiny, as shown in the Japanese/Chinese chart on p. 15 here.  They also became solar physics deniers by claiming that direct solar irradiance cannot account for the observed increase in temperature.


Reach Out and Touch Someone
It can't, of course.  So either it is all an Amazing Coincidence™, or the solar physics interface with terrestrial climate is a lot more complicated than that of a rotisserie.  This may well be the case, as the solar flux tubes that zap out and connect with the earth's magnetosphere were discovered only in 2008.

Danish researcher Henrik Svensmark and others have long postulated that the solar magnetic field modulates terrestrial cloud formation by blocking or allowing more cosmic rays to strike the Earth's atmosphere.  As the sun becomes more active, the field expands, blocks cosmic rays, inhibiting cloud formation and allowing the Earth to warm.  As the sun becomes less active, the field contracts, allows more cosmic rays to excite cloud formation, and allows the Earth to cool. This would explain nicely why the Maunder Minimum was in fact associated with a Little Ice Age.

This mechanism was confirmed by an experiment at CERN carried out by Aarhus University, Denmark.  Naturally, the director at CERN ordered the scientists there to report only the bare results and not to speculate over the implications for global warming theory.  Well, there's a first for everything, apparently.

Curiouser and curiouser, as Alice once said.  There is a distinct possibility that we don't know everything in the world yet! 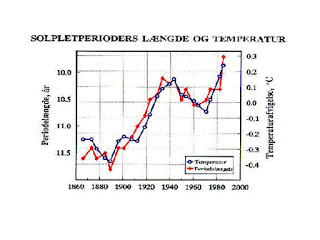 Back in the Day
When Evil Western Scientific-Technological Civilization™ was responsible for Global Cooling (by putting particulates in the air) I had run across a chart by a couple of Danes.  It showed the period of the solar cycle, inverted, in red overlaid on the temperature trend in blue.  I was shocked, since the world was at the time supposed to be cooling.  Without attracting much notice, temps had reversed and started climbing again.

Shortly after, I read an article by George Harper, "A Little More Pollution, Please!" in Analog (Oct 1986) which suggested that pollution-caused warming might be the only thing holding back the glaciers, since historically we were overdue for the next glaciation.  He thought that the ice age had begun with the Little Ice Age -- geologically, bouts of glaciation come on very suddenly, within about a century from temperate forest to glaciers -- but that unlike the previous glaciation, humans could not simply plunk their technology in leather bags and walk south.  By the Late Middle Ages, humans had too much invested in places like Moscow, Stockholm, Copenhagen, and London.  So they toughed it out and threw another log on the fire.  The soot lowered the albedo of the atmosphere and absorbed more heat from the sun and the earth warmed up.  But once we clean up the atmosphere we resume to colder regime of the LIA.

Well, that was good enough for SF; so when I was contacted about helping to write Fallen Angel, I already had some notions.  (George Harper appears in the book as "George Lutenist.")  I had also read John Gribbin's Forecasts, Famines, and Freezes, which described the then-consensus cooling scenario, and the novel he had co-authored with Douglas Orgill in 1980, The Sixth Winter, which was set in a world in which the Ice Age is returning rapidly and with a vengeance.


The Danish chart struck me as a cycle riding aback a trend, as described in Dewey and Dakin's 1949 edition of Cycles.  (In fact, the solar irradiance chart, above, looks like a cycle riding aback a logistic curve.)  The cycle length seemed to be about 70 years, 30-40 years up and 30-40 years down around a central trend line.  The peak c.1940 (when winter ice was disappearing from the Arctic) would then be followed by a trough c.1970, then another peak c.2000 and another trough c.2030.  With a bit of variability since the plotted data was rounded off in decades -- the Schwabe cycle averages 11 years.  So I supposed back around 1980 that temperatures would peak in the 1990s-2000s at the top of the sine wave and then continue flat or decline from 2000-2030, as in 1940-70.

That was just a SWAG made casually from an intriguing chart that crossed my eyes. 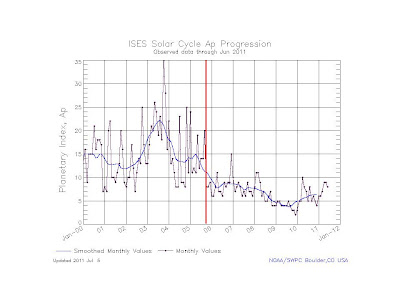 The Sun Has Gone Out
The reason for the Ice Age in Fallen Angels was that the sun had "gone out."  It was not producing the predicted solar neutrino flux predicted by solar theory.  This meant that either the models were wrong (a possibility for all models except global climate models) or something had gone wrong in the sun.

As the accompanying chart of the solar magnetic field (left) shows, there has been a sharp change in late 2005.  Solar Cycle 23 ended with a whimper, not a bang; and Cycle 24 was slow in starting and is not very strong.  Sunspot numbers are likely to follow a Poisson-like distribution, so a sudden spike might still bring the cycle back up to the prediction (see left side of chart).  But the predicted Max was not very strong to begin with.  If it doesn't, we may have already hit Solar Max for Cycle 24!
The sun is as spotless as it was in the Dalton Minimum, and some scientists are even beginning to mutter "Maunder."  If this Modern Minimum lasts as long as the Maunder, we may be in for a new Little Ice Age.  If so, we will pray for Global Warming.  Cold Kills.


Fallen Angels, Redux
What started me off on this was an article "The potential peatland extent and carbon sink in Sweden, as related to the Peatland / Ice Age Hypothesis," by L.G. Franzén, F. Lindberg, V. Viklander & A. Walther, Department of Earth Sciences, University of Gothenburg, Sweden.  The notion here is that as the world warms, the high-latitude peatlands will expand and absorb large amounts of CO2 and result in global cooling!


The researchers believe that the Little Ice Age of the 16th to 18th centuries may have been halted as a result of human activity. Increased felling of woodlands and growing areas of agricultural land, combined with the early stages of industrialization, resulted in increased emissions of carbon dioxide which probably slowed down, or even reversed, the cooling trend.

Well, it's a different mechanism; but where have we heard that before....?

And then with "Instability of climate and vegetation dynamics in Central and Eastern Europe during the final stage of the Last Interglacial (Eemian, Mikulino) and Early Glaciation," by Tatjana Boettger, et al., we find that the previous interglacial also ended with a couple of bouts of accelerated warming -- right before the glaciers returned.  As a news note notes the news:


German and Russian scientists say that it is normal for an interglacial period like the one just ending to finish with one or more brief - in geological terms - spells of warming before the glaciers return.
According to boffins based at the Helmholtz-Zentrum für Umweltforschung (UFZ) and at the Russian Academy of Sciences, in the Earth's history thus far there have been eras where the glaciers covered much of Europe, lasting about 100,000 years. These are separated by warmer interglacial periods lasting around 10,000 years. We are currently at the end of an interglacial era called the Holocene.

These terminal warming bouts were no doubt due to CO2 emissions by civilizations of the Hyborian Age, Conan being in the pay of the oil companies. 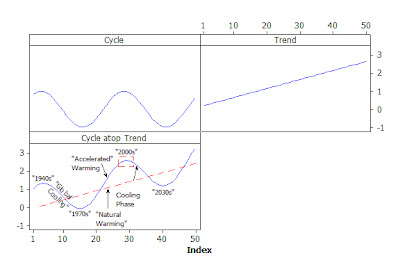 Posted by TheOFloinn at 6:17 PM