"Wait a minute!" Jack promised. "You said there were only three things I needed to know -- symptom to cause to solution -- and now you tell me there are three more things I have to know?"

"You should be so lucky.  I told you there were three things you had to know.  I never said there were only three things.  How stupid would that be?  I told you, it's useful to organize ideas into threes, as long as you don't force them."

Jack sighed an tucked into his salad.  The old man sure had a sour outlook on things. Get Off My Lawn his lapel button read.  Yeah, a grumpy old man, for sure.  And it wasn't like he had skin in the game, not as far as the storage tank problem went.

Of course, that might make him a perfect sounding board. He had no ego invested in anything that had been repeatedly booted around in interminable meetings. He remembered the 'first three' and suddenly realized that part of the trap lay in thinking about 'the storage tank problem' when the bigger storage tank was only a solution they had jumped to.  The problem was that he was paying too much demurrage to the railroad.

"But I don't see how that helps me very much," he said when he had voiced that thought to his companion. 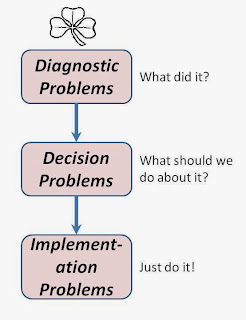 "There are three kinds of problems," Grumpy said.  "Some problems are diagnostic problems.  You know the symptoms, but you don't know the causes.  You need to find out what caused the problem.  That's Sherlock Holmes, the detective.  The other two problems are associated with the journey from the causes to the remedies.  That's Oliver Wendell Holmes, the judge.  One is when you know the causes but you don't know what to do about them.  You have to devise a solution. That's a decision problem.  The other is when you know the remedy but you need to actually put it into effect.  That's an implementation problem."

Jack had thumbed the triad into his cell. It made sense, but...  "And this helps me how?"

The old man shrugged.  "Because each kind of problem requires a different skill set to tackle.  Implementation wants skills in marshaling and organizing resources, creating work structure breakdowns, time lines and critical paths, PERT charts or Gantt charts, and all that fun stuff.  People who are good at getting things done may never realize that they are implementing the wrong remedy."

"Possible future problems?" Jack suspected a fourth kind of problem lurking there, but Grumpy assured him that future problems were the same as present problems.

"...only they haven't happened yet.  First rule of solutions is that the cure should not be worse than the disease.  Fortunately, there are only three problems."

Jack sighed, speared a cherry tomato from his salad, and waited.

Email ThisBlogThis!Share to TwitterShare to FacebookShare to Pinterest
Labels: the auld curmudgeon