"I would have thought," said Jack, "that there were thousands of different problems.  I mean in my plant alone we have dozens of processes -- manufacturing of a score of chemicals, administration of personnel, facilities, maintenance... You name it.  Last week alone we had a problem with reactor dumps on fluoropolymers, high costs on caustic, late deliveries from a supplier, a customer withholding payment, leaky valves on HF tank cars, a price increase on ammonia...  That's already more than three problems."

The old curmudgeon pursed his lips.  "I said three kinds of problems, but never mind for the moment.  Do you know what a problem is?"


Jack finished the last piece of grilled chicken on his salad.  He paused with the fork half-raised and cocked his head to look at Grumpy.  "A pain in the butt?" he guessed.

But the old guy was deaf to innuendo. His grin split his dirty-white beard. "Nah. A problem is when there's a difference between As-Is and Should Be.  Mathematically speaking, when IS≠SHOULD." He scribbled the equation on a paper napkin.  "For example, your demurrage costs should be...?"

"Well, no more than a thousand a month.  I mean you have to expect some amount of demurrage."

"You do?  And what is the current demurrage that makes you want to build a bigger storage tank?"

"I'm glad to see you have such a firm grasp on your problem."

"No need for the sarc, buddy." 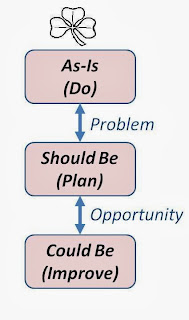 The old curmudgeon shrugged. "I'm not the one bleeding demurrage out my butt.  Hey, don't give me that look, young man.  You're the one who defined a problem as a pain in the butt."

"Actually, the corporate policy is to call them 'opportunities'."

"Semantics," said Jack.  He really had no time for word games.

"Speaking of getting to the point," Jack said as he waved to Betty and asked for a cup of coffee.  "You said there were three kinds of problems." 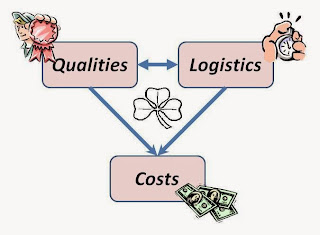 The old man grinned. "Okay.  The problems are the itches that want to get scratched." He counted off on his fingers.  "Something is not getting done, or not getting done right (which is the same thing).  It's not getting done on time.  Or it's costing too much to do.  That's quality, logistics, or costs."

"Really?  How long does it take to do something over again?  Twice as long, right?  So whatever percentage of your batches have to be reworked, repaired, or replaced, the cycle time is 2X, which means the poorer your quality, the longer your average cycle times.  You think of better quality on the two-step model."


"Oh," said Jack. "Quality."  And he used just that tone of voice that meant he had been down this road before.  "Another quality improvement drive?  Been there; done that."

"Yeah, and I bet you have the t-shirt, too.  I doubt you've ever had a quality drive, only quality drive-by's.  And after you've driven by, you drove right back to the business-as-usual lounge and parked your car in the parking lot.  You'd be a lot happier if instead of saying you've been there, you could say you are there."

"You aren't in the game.   Don't criticize me until you've walked a mile in my shoes."

"Yeah.  Because then I'll have a mile's head start.  And I'll have your shoes."

"You know, you can quality yourself right out of business."

"What do you want, a gold-plated beer can?"

The old man screwed up his face, took a sip of the coffee and held the cup out for the waitress to refill.  "Of course not," he said, and took a sip.  "If it were gold-plated, I'd have to reject it."

Jack was taken back at the unlooked for answer.  "Reject it?  Why?"

The old man stabbed his finger.  "Do you even know what quality means?"

Jack blinked at the sudden challenge and found himself stammering for a reply.  "Um, excellence, goodness, perfection."

"No, dagnabbit..."  The curmudgeon actually said 'dagnabbit'.  "Quality is a noun, not an adjective.  Or rather, it's a noun first of all.  And it means 'an essential or distinctive characteristic, property, or attribute of a thing.'  For example, the qualities of water are that it is clear, tasteless, odorless, has a density of 1.0 kg/m³, boils at 100°C and freezes at 0.0°C."

Jack laughed.  "If you think water is tasteless, you should come by the plant and try the water fountain."

"And what does that tell you?"

Jack sobered and gave the matter thought.  "There's something in the water," he said slowly.

"...that shouldn't be there.  Right.  Your water's IS doesn't equal its SHOULD BE.  You have a problem."

"Once you realize what qualities are -- and why you should use the plural -- you realize that people don't buy products, they buy qualities. They don't buy paper towels; they buy 'absorbency.'  They don't buy drills; they buy holes.  Your beer can customers...  Do they want gold plating?  Enough to pay for it?  No?  Is gold plating necessary to deliver a quality that they do want?  No?  Then you're adding cost without adding value.  What your customers do with the product determines which qualities matter."

"But different customers have different uses," Jack pointed out.

Jack waited, but the old reprobate did not elaborate and after while Jack sighed. "Okay, I see it.  Either you produce something that satisfies all customers' needs or I offer different grades or versions to different groups.  Like commercial grade and laboratory grade.  So what's the two-step plan for improving quality?"  All the plans he had ever heard of, from Zero Defects through Six Sigma had five or more steps.  ZD had had something like fifteen.

The old curmudgeon held up a finger: "First, make a lot of defects."  The finger was appropriate to the thought. He added a second finger.  "Then hunt for them and throw them away.  Of course, that costs more."

"And you have a better plan.  I bet it has three steps."

"Just one." He held up a more congenial finger.  "First, don't make a lot of defects."

Jack snorted.  "That's easy for you to say."

"Takes some getting used to.  Works the other way, too.  Reducing cycle time improves qualities."

"How so?"  Jack had always found speeding things up made worse output; but it was an easier sell to his managers, for some reason.

"Sure," said the old man when Jack has mentioned his.  "People would rather be told they're a little slow than that they're doing things wrong.  But cycle time is how long it takes to make one good product, whether that's a batch of chemicals or a ledger entry in bookkeeping.  There are a number of ways to shrink cycle time, and one way is to eliminate non-value adding work. They fewer things you do, the fewer opportunities you have to screw them up.  Reduce ten steps to eight, and you eliminate 20% of your opportunities for error.  The two steps you eliminated didn't add any value, but they could have subtracted it through handling damage and other crap."

Jack studied the sketch on the napkin.  "And that's why you drew double-headed arrows between quality and logistics.  But, hey, you forgot to put a second arrowhead on the lines to cost."

Grumpy shook his head.  "No, that's a one way street.  Fewer defects means lower costs.  Shorter cycles means lower costs.  But cost is an effect, a symptom of the other two. It's not a cause. You can't cut costs directly.  All you can do is spend less money, and that's not the same thing."  He finished his coffee and put the cup aside.  "Tell you what.  You probably have to get back to work soon.  I'll just leave you with a little anecdote."

"Yes, The Allegory of the Printing Plant."

Email ThisBlogThis!Share to TwitterShare to FacebookShare to Pinterest
Labels: the auld curmudgeon